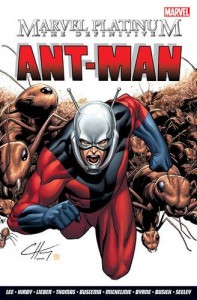 Marvel Platinum: The Definitive Ant-Man – Roy Thomas, Larry Lieber, Stan Lee, Kurt Busiek, David Michelinie, Tim Seeley, Robert Kirkman, Nick Spencer, John Byrne, Jack Kirby, John Buscema, Ivan Reis, Jerry Bingham, Roman Rosanas & Phil Hester (Marvel / Panini)
Considering that he’s such a central character to the Marvel Universe, Henry ‘Hank’ Pym (the original Ant-Man and creator of all the technology and chemistry associated with the character) has always been somewhat overlooked when it comes to the heavy hitters of the superhero community and the way fandom reacts to them. He was a founding member of the Avengers and the man responsible for creating Ultron, one of the most recognisable (thanks to the second Avengers film being a super-smash hit the world over) villains in the world of comics, but still he’s always failed to make the A-List in the superhero hall of fame; and while everyone from yours truly to Stan Lee has a theory about why he’s languished in relative obscurity, the real reasons I’m sure will forever remain a mystery. However, old Hank’s luck might be about to change as not only is he finally making his cinematic debut this summer, featuring two of his incarnations, which should hopefully turn the tide in the Pym popularity ratings.

Yes, there are two incarnations of Ant-Man, or more accurately three, all of whom feature in ‘The Definitive Ant-Man’. As you’d expect, the origin story is part and parcel of what you’d expect here and all three origins are given equal consideration here allowing the reader to form their own views on which Ant-Man is their definitive. First there’s the pulpy, fast and furious, science based adventure in which Henry Pym finds himself protecting secrets from saboteurs down amongst the ants; then the heartfelt, emotionally powerful origin that chronicles Scott Lang’s transition from ex-convict to the ranks of Earth’s Mightiest Heroes, then last but not least, the darkly humorous beginnings of Eric O’Grady’s anti-hero exploits. Ant-Man’s alter-egos are featured in all their glory, or lack of it in Eric’s case, in this concise, and indispensable, history of the character, along with some other frankly fantastic tales thrown in for good measure: the splintering and eventual reintegration of Pym’s personalities; Scott reintegrating into society and his daughters life after returning from the grave (he was dead and now he’s not, further proof, if any were needed, that not even death is eternal in four colour land); and the best of the bunch, Ant-Man (Eric O’Grady) teaming up with the Wasp (Hank Pym) in order to take on AIM. Whilst I love Ant-Man and Hank Pym, I’m more of a fan of Eric O’Grady than I am Scott Lang, as Eric’s self-serving, cowardly arrogance makes him a square peg in a world dominated by super-hero shaped round holes, putting him at odds with his peers, which makes him a far more interesting (albeit thoroughly unlikeable) character than Ant-Man’s other personas; and it was a very happy surprise to see Eric featured as much as he was here as Scott takes the central role in the film. Whatever the thinking behind it, the more O’Grady there is, the happier I am, and after reading this book, I’m a very, very happy man.

The art-work is, unsurprisingly, wonderful and makes you feel like you’re traveling through time with Ant-Man, as the illustrators’ varying styles echo the eras in which they were produced. Luckily the stories all remain eminently readable and hugely enjoyable, especially when Robert Kirkman and Phil Hester take the reins and let Eric O’Grady loose upon the Marvel Universe. He may be tiny, but that doesn’t mean he can’t pack one heck of a punch, and that is the mark of a true hero, one who I’m pretty sure is about to, with a little help from Hollywoodland, take over the world. And it’s about time that he did. Good things really do come in small packages… Tim Mass Movement