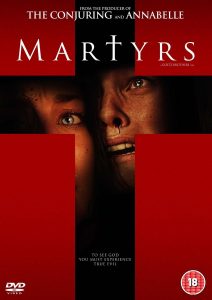 To his eternal shame, this writer has never gotten round to seeing the original French film, which is inexcusable, but also advantageous as this can be reviewed without the influence of that apparent classic overshadowing it. That said, even without seeing the original, Martyrs 2016 has that vaguely soulless feel about it that plagues so many US remakes of European (and elsewhere) originals, and it seems likely that the violence has been toned down, and the ending made more upbeat, to suit more mainstream tastes.

If that IS the case, then the original must have been exceptionally nasty, as this is pretty gruelling in several places, but there’s more to it than gore for the sake of revenge. There’s some reflection on religious fanaticism, and how far zealots will go to know their god, and the film-makers also strive (but unfortunately fall somewhat short) to demonstrate the power of unconditional love. There are also moments of beautiful cinematography to counterpoint the ugliness of the acts portrayed, a few genuinely scary moments (especially when a young Lucie is being haunted by her personal demons whilst cowering under the bed sheets), and some undeniably claustrophobic tension just prior to the flailing, slightly OTT finale.