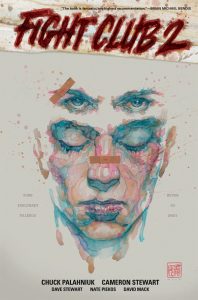 New York Times best-selling novelist Chuck Palahniuk and acclaimed artist Cameron Stewart have collaborated for one of the most highly anticipated literary events of 2016: the return of Tyler Durden. The first rule of Fight Club 2 might be not to talk about it, but Fight Club 2 is generating international headlines and will introduce a new generation of readers to Project Mayhem.

The critically acclaimed ten-issue comic series concluded last month, and the hardcover collection hits bookshelves on June 15. As announced last week, Palahniuk will also appear on a 10-city book tour to support the release of his graphic novel.

Ten years after starting Project Mayhem, Sebastian lives a mundane life. A kid, a wife. Pills to keep his destiny at bay. But it won’t last long; the wife has seen to that. He’s back where he started, but this go-round he’s got more at stake than his own life. The time has arrived . . .

An oversized, slipcased hardcover limited edition will be released in October. It features a tip-in plate signed by Chuck Palahniuk, ninety pages of bonus content, and a striking new cover by legendary artist David Mack.

Fight Club 2 Library Edition is in stores October 5, 2016. Preorder your copy today at your local comic shopor through these fine retailers: