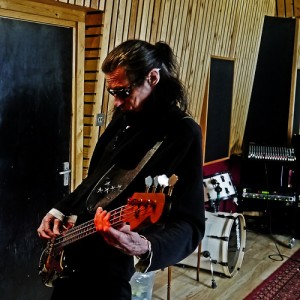 Martin has been in the business for 40 years, playing bass for Rick Wakeman and Paul Fox, releasing two albums with hard rockers Scarlet, performing on Nicko McBrain’s ‘Rhythms of the Beast’ and as The Entire Population of Hackney with Iron Maiden, FM and the rest of Marshall Fury.

Steve Zodiac (Guitar/Voice) & Joe Clancy (Drums) Statement:
“We are very lucky to be able to welcome Martin Connolly to the band. Despite knowing Vardis would continue, after losing Terry so suddenly it took some time before we could consider playing with another bassist. By the time we were ready, the job required someone with the musicianship and experience not only to maintain the power of our live shows but to form a tight chemistry quickly. After just one rehearsal we knew we wouldn’t need to see anyone else, Martin is a top bassist and has brought a new dimension and fresh energy to Vardis as we rebuild to get the show back on the road this year. Thank you all for your support and patience, we are proud to rock on with you in tribute to a man whose life was music.”
MARTIN CONNOLLY adds:
“It was a privilege to be asked to join Vardis and take over from such a talented player. Terry and I weren’t close friends but our paths crossed many times over the years – I bought my Fender Precision from him in 1984. Our styles are very different, so I’m grateful to Steve and Joe for giving me the freedom to put my own mark on the music. Rehearsals have been a blast, but we’re itching to get out there and make some noise!“
Vardis are signed to SPV/Steamhammer – new album “Red Eye” will be released worldwide in 2016.
VARDIS live 2016
26.02.GR-Athens – Up The Hammers Festival
09.04.NL-Tilburg – Little Devil (sold out)
10.04.B-Roeselare – Verlichte Geest
12.05.E-Ibiza – Hard Rock Hell Road Trip
03.06.SE-Alvesta – Muskelrock
26.06.GB-Biggar – Wildfire Festival