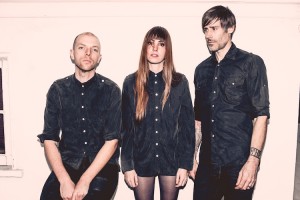 Seeing its Worldwide release on April 7th via Sargent House
Listen to “Less Than” HERE.

Los Angeles’s Marriages have premiered another song from their new full-length album, Salome. Titled “Less Than”, this is the second track to surface from the forthcoming release and it can be heard now via ConsequenceofSound and Soundcloud in advance of the album’s April 7th release date.

Additionally, Marriages have just announced two European / UK festival plays for 2015; the first will be at Roadburn Festival on April 9th that will be directly followed by a European tour supporting Wovenhand, who has also just recently signed to Sargent House. In late August, Marriages will return to the UK to play ArcTangent Festival in Bristol alongside five other Sargent House bands including regular tour mates Deafheaven and Helms Alee. In addition to playing a Marriages set, vocalist Emma Ruth Rundle will also be performing solo – check out a full listing of all Marriages shows below.

Marriages began in 2011 as a collaborative effort between former Red Sparowes members Emma Ruth Rundle (guitar, vocals) and Greg Burns (bass, keyboards). Showcasing Rundle’s exceptional playing more vividly than the dense architecture of the Sparowes could allow, Marriages’ departure from purely instrumental rock, too, helped bring her to the forefront, revealing a voice equally fragile and ferocious. Enlisting Sparowes drummer Dave Clifford, they recorded Kitsune, released on Sargent House in 2012. Subsequent touring with Russian Circles, Deafheaven, Chelsea Wolfe and others honed their vision while introducing the band to a broad cross-section of heavy music fans. Full time drummer Andrew Clinco completed the equation in late 2012, the final component in Marriages’ frequently epic postpunk-by-way-of-stoner-rock sound. While the group busied themselves writing the songs that would become Salome, Rundle issued solo album Some Heavy Ocean in early 2014, earning praise from the likes of Pitchfork, NPR, etc. Promoting that record found her touring the US as direct support to King Buzzo of The Melvins, immediately after which Marriages set out on tour once more, this time with the legendary Boris.

Back in Los Angeles, Marriages spent the end of 2014 completing Salome, a timeless 9-song monolith of a debut LP. Propulsive, frequently iridescent, the compositions on Salome are confident and evocative, the sound of a band focusing their strengths to great effect. Nowhere is this focus more evident than on opening track, “The Liar”. Frontwoman Rundle wastes no time settling into a haunting earworm of a riff, before unleashing a moody tangle of slides and reverb. Her breathy voice, veiled in subtle effects, elicits irresistible curiosity; though it may not always be clear what she’s saying, there’s undeniably something to the way she’s saying it. Bubbling just under the surface is the overdriven bass of fellow Sparowes alum Greg Burns, who conjures a menacing rumble from his instrument in glorious contrast to the glassy needles of Rundle’s wailing guitar. New addition Clinco, whose formidable presence appears largely responsible for the kinetic reconfiguration of the band’s sound, functions as both an anchor and a jostling wave, holding it all together with precision while he rattles his cage. Second track, “Skin”, is perhaps even more infectious, to the point where becoming engulfed in the emotional tide of the song is simply unavoidable. Its indelible chorus is one of the album’s most iconic passages. Here, especially, Marriages wear their influences on their sleeves, a convincing amalgamation of mid-eighties post-punk (Cocteau Twins, The Cure, etc.) and what ought to be called poststonermetal. Their shoegaze aesthetic combined with Rundle’s crushing riffs make Marriages unique among their contemporaries. The tumbling urgency of “Southern Eye” could fit comfortably on Echo and the Bunnymen’s Heaven Up Here yet somehow sits squarely within the realm of Sargent House labelmates Russian Circles. Elsewhere, Marriages toy with a pop approach before invariably releasing a torrent of cascading noise, though never enough to bury the hook they’ve so cleverly constructed. Title track “Salome” is the album’s centerpiece. An ominous, otherworldly swell of emotional waxing and waning, it finds Rundle at her most vulnerable, strokes of Kate Bush and Sinead O’Connor writ large over a canvas of brooding, fuzz-pedal density. Comparatively subdued, though by no means anemic, “Contender” closes the album on a tentative note, its unresolved final chord a sobering wake-up suddenly casting doubt on the probability of the previous 43 minutes. Throwing open the curtains on not only their sound but on their songwriting as well, Rundle, Burns, and now Clinco seem perfectly at ease scaling anthemic peaks and heartbreaking valleys, often in a single composition. Salome finds Marriages fully embracing their skill at crafting timeless songs with chillingly epic results.

More songs and information regarding Marriages‘ Salome surfacing soon. For now, keep up with Marriages via MarriagesBand.com and look for Salome on April 7th via Sargent House. 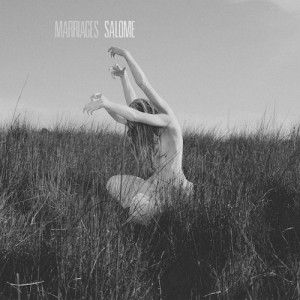 Salome pre-orders on iTunes and HelloMerch.