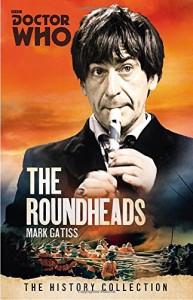 Doctor Who: The Roundheads (The History Collection) – Mark Gatiss (BBC Books)
I’m not old enough to remember the halcyon days of the purely historical Who adventures, but I am old enough, like author Mark Gatiss, to have pored over, and consumed with rabid delight, the Target novelisations of the First and Second Doctor’s voyages through Earth’s past. They were an integral part of what made Doctor Who… Well, Doctor Who, as he tripped through ages past, more often than not falling foul of some demonised villain and proving that while he may have mastered the sciences and their related disciplines, when it came to history, most of the time, he was as much in the dark as the rest of us were, and are. The historical stories allowed the Doctor’s fallibility to rise to the surface and become a recognizable part of his character, humanising him, which finally led to him becoming ‘The Doctor’. ‘The Roundheads’, reissued as the Second Doctor’s chapter of ‘The History Collection’, is Mark Gatiss’ ode to those early, golden days of the show, and within its pages, he’s managed to capture lightning in a bottle and bring history, and The Doctor’s involvement in it, to fantastic, high definition, three dimensional life.

Set during the final days of the Civil War (but I’m sure that you guessed that much from the title, didn’t you?) when Cromwell sought to try Charles I for treason, ‘The Roundheads’ is a glorious, good old fashioned romp involving pirates, adventure on the high seas, political intrigue, double dealing, espionage and all manner of secretive goings on. Cromwell and his allies attempt to reinforce their position while the King’s supporters seek to tip the balance of power and free their liege. Told from the perspective of both the highest offices and their occupants, and from the seemingly lowliest of loyalists, with The Doctor, Jamie, Ben and Polly falling somewhere in between, ‘The Roundheads’ also hammers home that favourite of all time travelling shows and takes, the importance of non-involvement and the damage that change that can end up causing to the established pattern of time, even pausing briefly to outline some of the alternative worlds that await them should they happen to become irreparably entangled in the many threads of the web of time. However, this is The Doctor, and a little meddling is inevitable; and as Charles, Cromwell and their respective followers tussle over England’s future, things don’t appear to be as clear cut as the history books would have us believe.

Full of wonderful characterisation and a plot that begins at a break-neck pace and hurtles ever faster toward its conclusion without straying outside of the lines of fact, but incorporating just enough fiction to tempt even the most ardent historians to lose themselves in its pages, ‘The Roundheads’ is a compulsive page turner of the highest order and a book that you won’t be able to tear yourself away from until you’ve the final sentence. S’blood, ‘tis a fine old tale and no mistake… Tim Mass Movement