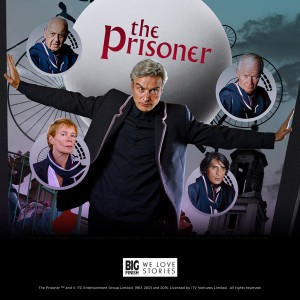 Big Finish is delighted to confirm that actor Mark Elstob has been cast in the leading role of Number Six in its brand new audio revival of The Prisoner.

The new production is based on the highly influential 1967-’68 ITV series, which starred Patrick McGoohan as a former spy imprisoned in the mysterious ‘Village’. Desperate to learn his secrets, the Village’s authorities used ever more ingenious methods to bend Number Six to their will — including the iconic ‘Rover’, a menacing, howling ball-like object.

Mark is known for his many stage appearances, including Present Laughter, Neville’s Island, The Importance of Being Earnest, Sir Peter Hall’s Hamlet and Steven Berkoff’s Salome, as well as for his year in Emmerdale as Andrew Fraser. He was chosen for the part of Number Six after an extensive search by writer/director and producer Nicholas Briggs.
“I knew, of course, that the casting of Number Six was pivotal,” says Nick. “Patrick McGoohan was the driving force of the original series, both on and off-screen. The new central performance would have to be every bit as powerful in its own way. I did a lot of searching and listening to clips and showreels. I had meetings, I spoke to actors and agents. I looked further and wider than I’d ever done for any Big Finish casting. And then I realised that I’d worked with the ideal person, long, long ago. An actor who was a brilliant, powerful leading man — Mark Elstob. There was one other key ingredient I was looking for. Someone for whom doing The Prisoner would mean something. Someone who knew the series. I didn’t know Mark was a fan of The Prisoner, but I knew he was a fan of Doctor Who, so I harboured a hope that, as someone interested in cult TV, he’d at least have heard of The Prisoner. As luck would have it, he is as nuts about the series as I am. We had a meeting — and there, sitting in front of me was my new Number Six. I was certain.”

Mark Elstob: “Patrick MacGoohan’s The Prisoner is a bona fide classic, representing a high watermark of television. In the hierarchy of British TV fantasy, Number Six has a status perhaps matched only by Quatermass and Doctor Who. For me personally, to play this part is more than just a great job for an actor, it is the stuff of which a fan’s dreams are made. Thank you, Big Finish!”

The administrative head of ‘The Village’ is Number Two, and throughout the original series Number Six found himself pitted against a series of different authority figures in this role. The audio series follows the same template, with different actors appearing in the part. John Standing (V for Vendetta, The Elephant Man, 8 ½ Women), Celia Imrie (Bridget Jones, The Best Exotic Marigold Hotel, Highlander), Ramon Tikaram (This Life, Fortitude, Stella, Man Down) and Michael Cochrane (Sharpe, The Archers, The Iron Lady) will each appear as Number Two, subjecting Number Six to a variety of ordeals.
“I remember explaining to Celia Imrie that they used to hire whichever marvellous, fruity actor was available to play Number Two for each episode,” says Nick. “For The Prisoner: Volume 1, I opted to echo this policy, dipping into the impressive back-catalogue of actors Big Finish has been lucky enough to work with. And I can confirm that they are all not only fruity and marvellous, but by turns terrifying and mesmerising.”

Other inhabitants of the Village include Sara Powell as Number Nine, Kristina Buikaite as Number Eight and Jez Fielder as Number 17 — with Helen Goldwyn as the Village Voice, Jim Barclay as Control and Barnaby Edwards as Number Two’s diminutive Butler. Sarah Mowat plays the role of Zero-Six-Two, a former accomplice of Number Six.

The Prisoner: Volume 1 is released in January 2016, you can listen to a trailer and/or pre-order here… http://www.bigfinish.com/releases/v/the-prisoner-volume-01-1181