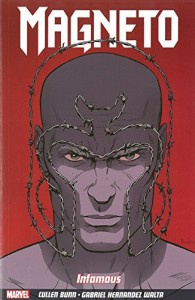 Magneto: Infamous – Cullen Bunn, Gabriel Hernandez Walta & Javier Fernandez (Marvel / Panini)
Nobody ever really changes. It doesn’t matter how much they try to say, or pretend they have; deep down inside, they’ll always be the same person they’ve always been; driven, given purpose and motivated by the same dreams, desires, neuroses and emotions that they always wear. Oh sure, we can adopt any number of different traits and wear different social masks in order to convince ourselves and others that we’ve become someone and something that we’re not, but we’ll always know that on some level, we’re lying not only to ourselves, but to everyone around us as well. Which is the position that Magneto finds himself in as ‘Infamous’ begins, and sick of the deception, he sets out to once again become the man he used to be, dropping the veneer that he built after siding with, and fighting alongside Cyclops in order to fight for his species on his own terms. It’s true you know, old habits really do die hard.

‘Infamous’ revolves around Erik accepting who he really is and adjusting to that role after his abilities have been severely compromised. Although his power is now limited, if anything it makes him more dangerous, as it means he has to get up close and personal in order to use it. And in Bunn’s story, instead of striding among mortals as a near omnipotent being, he’s now fighting a guerrilla war, waging his one man vendetta in brutal and decisive fashion; striking against fringe groups and their gruesome experiments in sentinel technology and gaining a modicum of ‘vengeance’ on those he sees as traitors. Magneto’s thirst to enact what he’s always seen as his destiny becomes almost overpowering, and even though he sets out to accomplish his mission alone, as powerful as he still is, even he needs an ally. However, you know what they (the ever elusive they) say, choose your friends wisely and your enemies… and on this front, I fear Magneto has fallen victim to the machinations and schemes of another, a plan that will doubtless come to fruition at some later point, a date I await with anxious expectation.

As the story unfolds, it shows Magneto as he really is, a cunning old warrior, too set in his ways to change, who stalks his quarry in a world that is caught in the thrall of endless change and evolution. Cullen Bunn’s masterful script has an air of eighties action thriller, the lone wolf setting out to right everything he perceives as being wrong with the world. That, combined with the gritty, almost noir-esque artwork of Walta and Fernandez, gives this hard as nails, character driven, violent epic a unique and enticing vibe that grips the reader from the first frame to the last. Fantastic… Tim Mass Movement