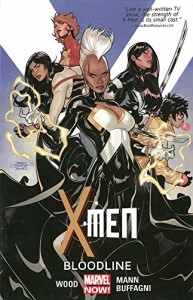 X-Men: Bloodline – Brian Wood, Clay Mann & Matteo Buffagni (Marvel / Panini)
Being an X-Men fan is almost like waiting for the bus that never arrives at the moment. You spend what seems an eternity (but in reality is nothing of the sort) waiting for one, and then three or four arrive at once. So it’s kind of lucky that us X-Men fans have a voracious appetite when to comes to stories and ongoing tales of Marvel’s premier mutants in all their guises and assorted factions, and ‘Bloodline’ the latest instalment of Brian Wood’s ongoing saga, ticks all of the requisite boxes and a few more besides. It is yet another reason to make sure that each and every X-Men book rests squarely at the top of your pull list.

Story wise, the central plot of ‘Bloodline’ follows a traditional path, revolving around Shogo’s biological father, a villain going by the name of The Future, attempting to kidnap and coerce the X-Men into giving him his son. Of course, it all goes disastrously wrong and Jubilee ends up in his clutches, forcing the X-Men to take up arms and rescue their imprisoned colleague. While that’s an enticing, and enjoyable enough prospect, it’s the focus on characterisation, the way it develops and gives a voice to previously woefully underused members of the team, and the sub-plots and connecting arcs where ‘Bloodline’ really shines. Juggling the main story along with the developing relationship between Storm and her daughter from the future that plays out as she considers her position in, and as leader of, the team, the emotional and physical damage caused by The Future and an attempt by a group of the school’s rising stars to prove themselves in a danger room scenario where anything goes after all the safe guards are removed, that’s where this books strength really lies. It’s lot to take in, and that’s just scratching the surface of what ‘Bloodline’ has to offer. And the more involved you become in it, the more it rewards you as additional threads, resting just below the surface, reveal themselves, adding dimension after dimension to the plot, fleshing it out and bulking it up like some kind of steroid crazed, iron pumping, heroic maniac whose enthusiasm for his chosen pursuit and goals is not only contagious, it’s downright infectious. It just keeps on getting better and better…. Tim Mass Movement