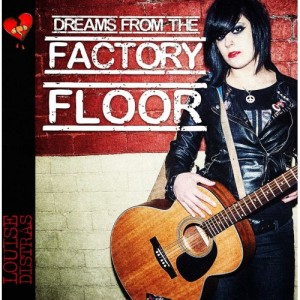 Louise Distras – Dreams From The Factory Floor LP (Pirates Press)
Louise Distras’ debut album has been out for a while on compact disc but now Pirates Press have given the release the deluxe vinyl treatment, and this is definitely an album worth of that. Hailing from Wakefield, West Yorkshire, Louise has released what could be called a contemporary protest album but this goes far deeper than that. In our world there is a lot to protest about – capitalism, working class oppression, homelessness, sexual and gender inequality are all topics in the firing line here, not to mention the delights of Wakefield town centre on a Friday night. There is a lot of anger on here but it is tempered with love, hope and freedom and the overall effect is a positive one, reflecting a desire for change rather than wallowing in the misery of humanity. If you have seen Louise live then you know that she comes armed with an acoustic guitar and a fantastic voice, but this live formula can be hard to capture in the studio. The success of this album is down to a number of factors – vocals and guitars obviously being the key players, but some songs are augmented by a full band, or a harmonica here, a piano there, ingredients that help make this an incredibly well rounded album. Acoustic punk, protest music, call this what you like but labels are meaningless as this is simply one great collection of songs. Tom Chapman