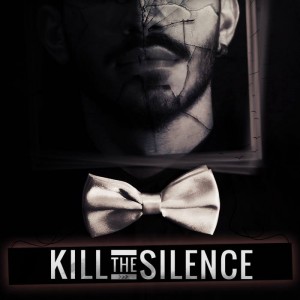 Kill The Silence – S/T Download (DIY)
This is the debut EP from a Leeds hardcore/ metal band, and serves well as their “welcome world” calling card. I am amazed by lots of new bands’ ability to kickstart their musical journey at such a high level and Kill The Silence is no exception. The four songs on here are very well played, and the production is spot on. The EP starts out with by far their best track, “Get Out, Get Out!”. Opening with a rock riff of mammoth proportions and joined by an anthemic vocal line that soars majestically over the heaviness, this is excellent stuff and displays a lot of character. “Darling” is the next track and continues along similar lines, although by now some chaotic hardcore elements have found their way into the mix. “S.S.D.D.” brings the rock back to the fore, before record closer “Chapter II” reintroduces the chaos factor. Whereas these four lads are more than capable of writing a big rock number, when things get more complex, they lose a lot of individual character and sound much like the countless other bands peddling this genre. It feels like they are trying too hard to put as many influences into the sound, diluting instead of enhancing their style. On the strength of “Get Out, Get Out!” definitely a band to watch out for. Tom Chapman