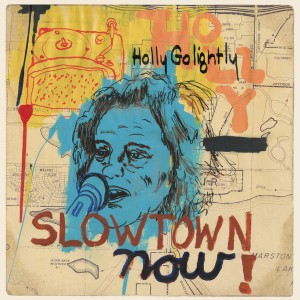 Holly Golightly – Slowtown Now LP/ CD (Damaged Goods)
It’s been over ten years since “Slowly But Surely” was released, but finally Holly Golightly has deemed the time right, to release another solo album. The name “solo” is slightly misleading as Holly’s vocals are augmented by guitars drums and double-bass as well as the occasional brass interlude. Having started off her musical life under the schooling of Billy Childish, Holly has long since followed her own path and forged her own style, and “Slowtown Now” is today’s soundtrack to that journey. Part blues, jazz, country, sixties pop, all with a laid-back vibe throughout. These songs aren’t meant to be rushed but savoured at a leisurely pace. Holly’s vocals are often dreamy, so that by the time album closer “When I Wake” comes around, her voice is dripping with echo and reverb. If Nancy Sinatra is drinking coffee and whisky with Tom Waits on a late-night train that rumbles through the night, being filmed in black and white as one of the scenes for a classic film noir movie. Slowtown Now would be the perfect soundtrack, so let this wash over you as you close your eyes and let the musical picture that Holly paints unfurl in your mind. Tom Chapman