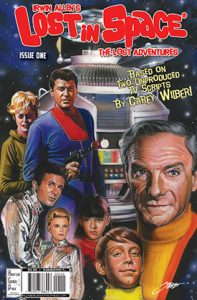 While many series come and go, very few reach the kind of iconic, or cult, status that enables them to thrive more than five decades after they first appeared on screen. Lost in Space is one of that all too rare breed. Charting the adventures of the Robinson family, their ‘faithful’ robot, Major Don West and the scheming Doctor Zachary Smith, following a mishap that blew them far off course after they set off to establish Earth’s first deep space colony, it’s been beloved by Sci-Fi fans since it debuted in nineteen sixty-five. Even the ill-advised, mega-budget nineties cinematic remake didn’t put much of a dent in its unrelenting stride and even though, just like its more famous planet hopping cousin Star Trek, it only lasted for three seasons, at any given moment, somewhere in the world, somebody is tuning in to watch Lost in Space.

Based on the scripts of two un-flimed episodes from the final series, American Gothic Press’s (the in house comic division of Famous Monsters of Filmland) six issue Lost in Space series blasts off to a magnificent start with The Curious Galactics. The story, like most Lost in Space adventures isn’t overly complicated and involves a mysterious alien race running a series of experiments designed to test intelligence on Will, Professor Robison, Major West and the Robot while they’re setting up a series of radar arrays far away from the Jupiter 2. These tests, which their subjects are unaware of, push Will, his dad and Don far beyond their breaking points and prevent them from returning to their ship. As they progress, the experiments become increasingly fraught with danger, and there’s a palpable sense throughout that this might really be the end for the at least one member of the crew, especially as you know that the tale is adapted from a previously unused script that was designed to slot in at the end of the final series. Does it bring doom and destruction down upon the Robinsons or does it generate its own happily ever after? Well, all I’m going to say is, it is Lost in Space, and if you’re a fan, you already know how these things end. Holly Interlandi has done an incredible job of adapting these stories.  The dialogue and plot are period specific, flow naturally and easily and she hasn’t given in to twenty first century conventions or tried to soften any of the eye brow raising attitudes to gender roles that were part and parcel of the original show.  The latter detail may seem a little odd at first, but it has a purpose, which is to establish these books and the tales that they tell as part and parcel of Lost in Space’s mythology and canon, and that’s exactly what Interlandi has done. She’s made sure that The Curious Galactics has entered the Lost In Space lexicon. And Kostas Pantoulas sublime and intricately detailed, retro style artwork lends Carey Wilber’s ideas an authenticity which, if you didn’t know better, would lead you to believe that the books were a product of the sixties rather than the modern world. In fact, American Gothic’s Lost in Space is so good, you don’t even notice Doctor Smith’s absence from the proceedings until he finally appears in the closing moments.  So never fear, Smith is here, but not as much as he, ideally, should be. Still, you can’t have everything can you?  Tim Cundle