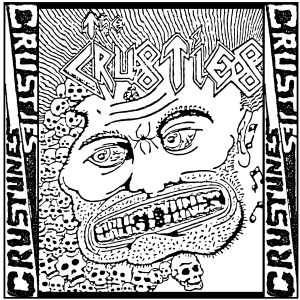 Given the band’s name, most punks would automatically assume that The Crusties played bullet belt encased, cider fuelled, dreadlock driven D-Beat, but nothing could be further from the truth, as this mid-eighties Milwaukee band straddled the middle ground between Toxic Reasons and D.I. and blasted out melodic skate-core that was infused with a mild dose of cowpunk. Having long since split, their name now dwells in the of the much missed, gone way too soon section of the Hardcore Hall of Fame. Their only album, Crustunes, was always one of those records that you needed to hear, but would end up paying an incredibly small fortune for on Ebay; was being the operative word, as Beer City have finally managed to reissue it, albeit in limited numbers.  Which means that if you’re quick, you can now own this legendary slab of HC history without having to re-mortgage your house or sell your other half into slavery, and that’s never a bad thing. So what are you waiting for? Grab the record, grab your deck and let’s skate… Tim Cundle