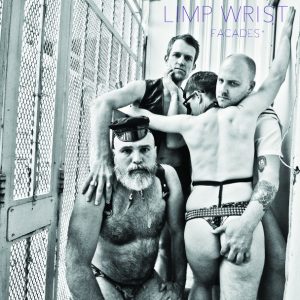 Sometimes an album comes along and hits you like a bolt out of the blue. Now, I cannot claim to be a hardcore punk rock aficionado as my feet are more firmly in the traditional punk, glam and garage rock camps, but if something’s good, it’s good; and on this occasion it’s something quite spectacular. I stopped in my Dr. Marten tracks and my ears pricked up after stumbling upon this force of nature.

Forever late to the party, this is Limp Wrist’s first long player in some 9 years. Where the hell have I been? Locked up in some toilet cubicle with too much Peruvian marching powder up my nose, probably. Shame on me for not discovering these noise merchants from the queercore punk subculture sooner.

From the onset of Facades‘ title track we get brutal and urgent speed driven punk rock led by the ever angry Martin Sorrondeguy. There’s clearly still unfinished business in their scene where questions need answering and issues that need addressing. Limp Wrist tackle things with venom and purpose. On hearing this record it suddenly seems that my beloved Turbonegro will be quaking in their double denim. This is Limp Wrist’s life, others’ lives in and/or out of their community… and it matters.

As well as facing up and calling out people in their own punk rock fraternity, the lyrics also lean to the current political climate in their USA homeland. And let’s be honest, there’s more than enough to vent about on that front. Here, the band go straight for the jugular. Or is that the clown?

But wait a minute, there’s more; a twist. Side A of the record offers 8 tracks of in-your-face hardcore. Flip over the plastic and we’re into 3 tracks of trippy electronica. “Oh no” I hear you cry at such a drastic diversion. For me, it works a treat and reminds me of debauched nights of yesteryear. The two parts of this record reeks of naughty club night outings at TJ’s in Newport, Wales. The year was 1990-something and we’d dance to the Dead Kennedys, full of Colt 45 and Special VAT snakebites. Afterwards, as the MDMA fades we’d head back to my grotty bedsit for some leftfield acid house. That is exactly what this short, sharp album does. Musically, it takes you on a manic indulgent night out and tails off into those beautiful wee, hedonistic hours.

There’s nothing quite like getting a 12″ in your hands and the homoerotic front sleeve is a statement of intent. If I was casually getting my fingers dusty whilst flicking through the stands at my local record shop, I’d immediately say “What is this?!?” closely followed by “I’ve got to have it!” This is the stuff Tipper Gore warned you about.

Included with the vinyl is a 40 page booklet in a fanzine style which celebrates (otherwise) unheard voices and works from homosexual artists, writers and musicians. Well, that’s if you’re lucky enough to get your mucky mitts on these beautiful pages here in the UK. A statement via Twitter from the record label reads:

“There is a first time for everything. Limp Wrist LP booklet just got refused by the printers based on the content. Too steamy for UK 2017.”

From the music to the attention to detail in the art, Facades sits as a complete package of dedication. I may not understand everything Limp Wrist have to shout about, but I can still stand shoulder to shoulder with their fury. This album and art is directed at rural queens, transgender kids and for those who haven’t quite worked things out yet. In the words of the band themselves: “Be off – make art, make music, write, dance, build, fuck, document, live and love.” Ginge Knievil.