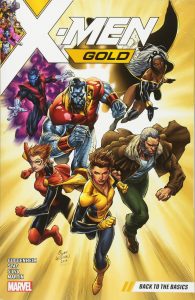 The struggle for equality is one that has beset mutant-kind since homo-superior first appeared in the Marvel Universe; and following their brief, but intense war with the Inhumans and the destruction and mistrust that it sowed; any gains that the mutant cause made during the last half century almost disappeared overnight.  And it’s in this “brave” new world that Kitty Pryde finds herself leading the X-Men, a team comprised of faces old and new alike, and continuing Charles Xavier’s mission to protect and save humanity and mutants from each other, themselves and all, and any, other threats. Helping those who hate you, often at great personal cost and loss, is a daunting and formidable task, but one that Kitty is sure that her team is more than capable of; and in Back to Basics their resolve is tested to extreme limits and far beyond. Facing increasing anti-mutant sentiment and rhetoric, the X-Men find themselves battling a team of old adversaries who have declared war on humanity, but nothing is ever that straight forward or simple for the children of the atom and they soon become entangled in a complex and devious scheme to bring mutant-kind to its knees.

It’s true you know, there is no rest for the wicked or the righteous and no sooner have they emerged victorious*from tangling with their old foes, than the face of true evil, Trask, once again emerges from the shadows to “help” launch a technological all-out assault on mutation. Remember I said that nothing was ever simple for the X-Men and their ilk? Well, this attack gets out of hand as the parameters for those targeted become a little too vague and ends threatening all of humanity. And guess what the only thing standing between homo-sapiens and sure and certain destruction is? That’s right folks, it’s the X-Men.

Okay, cards on the table time, I’m a bit of a Guggenheim fanboy and will mark** out for just about anything he writes, and in Back to Basics he’s weaved a little more of his magic into every fibre of the linked stories. Plot, characterisation, dialogue and interaction all hit their desired target in a grouped bullseye and even serves to distract your attention from the latter half of the book’s artwork, which while incredible to look at, isn’t exactly to my taste as I always find Silva’s pencils to be a little too cold, calculating and lacking the warmth and depth of character that some of his contemporaries display. Maybe it’s the fact that Syaf’s deft, detailed and classic style dominates the first half of the book that makes it more noticeable, but art wise, it certainly feels like Back to Basics is a book of two halves. But, you know the whole is guided by Guggenheim, which completely overrides my minor, and incredibly petty quibble about the vastly different styles of the artists, as Back to Basics is a mutant tale well told and bodes incredibly well for Xavier’s School for the Gifted and both its students and teachers.  So get those shades ready, as the future is looking kind of bright for the X-Men… Tim Cundle

*It’s not a spoiler. It’s an X-Men book. You don’t really think that they’re going to lose do you? Unless of course, Marvel were going to kill off the X-Men and if they were, believe me you’d have heard all about, and known every single detail of, their deaths long before you read this review. Why? Because people can’t keep secrets (which is why the idea of mass conspiracies and a shadow one world government who know all about aliens, water powered engines and who “really”*** killed JFK is ludicrous) and everything leaks on the internet.

**It’s a wrestling thing. If you “mark” out about something or someone, it means you really dig it. And as the author’s given name is Marc, it’s kind of a pun. No, it really is. Honest.