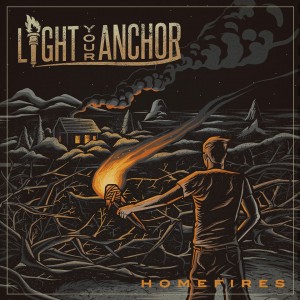 Light Your Anchor – Homefires CD (Let It Burn)
This band has been around for a couple of years now, and they are proud to present us with their second album. You can tell that a lot of time and passion has gone into the creation of “Homefires”. From songwriting, to musicianship, artwork and overall concept, this is clearly a labour of love and that effort has paid off. Light your Anchor play a very contemporary hardcore style – blending a metallic guitar style and delivery that reminds me at times of bands like Shai Hulud or Comeback Kid. On top of that they add a combination of sung and screamed vocals, which is a real crowd-pleasing combination. The album has a theme running though it with the Homefires appearing in the intro, on the title track, as well as on the final, acoustic song, and that gives the record a storyline, a musical journey courtesy of Light Your Anchor. Influences on this album are definitely from the newer hardcore eras, but there is plenty of speed and power that could appeal to the old school hardcore people too. Impressive debut album. Tom Chapman