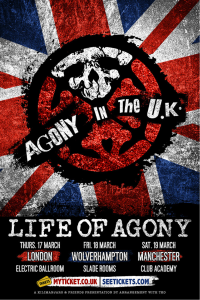 Brooklyn’s LIFE OF AGONY will make their first UK appearances since 2009 in March 2016.
LOA features the original line up of Mina Caputo, Sal Abruscato, Joey Z and Alan Robert. The special three show run, dubbed “Agony In The UK”, will treat lucky fans in London, Manchester and Wolverhampton to a night of music spanning the band’s career from their legendary 1993 debut River Runs Red to 2005’s Broken Valley.

The band comment, “It’s been years since LOA last performed in the U.K., so we cannot express just how excited the whole band is to see all of our friends again this March for three special nights!”
With the chance to see hits such as ‘Weeds’, ‘Let’s Pretend’, ‘Method Of Groove’ and ‘This Time’ performed live in the UK for the first time in an age, this trio of shows are a must-see for any fans of the seminal hardcore mob.

Tickets go on sale 10am Friday 11th September at www.seetickets.com