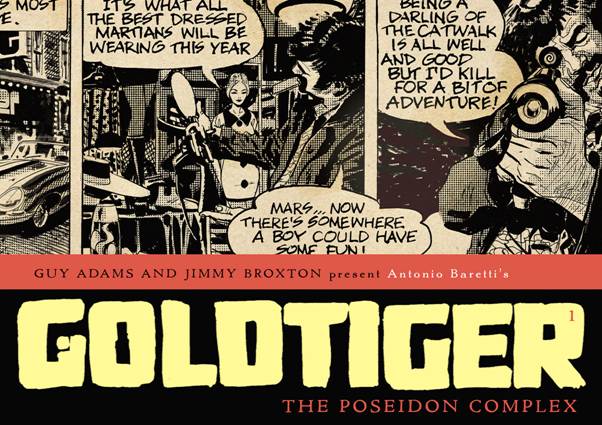 But it’s also a Kickstarter success story, a time-capsule of one of the most exciting and fertile periods in comics, and an entirely new departure for 2000 AD.

Goldtiger, presented by Guy Adams and Jimmy Broxton, is being published by 2000 AD in the UK in March 2016.

Begun as a Kickstarter campaign, this love-letter to the British newspaper adventure strips of the 20th Century is a fascinating and full-bloodied mix of Modesty Blaise and The Amazing Adventures of Kavalier & Clay.

‘Rescued’ by 2000 AD for publication, it is the first time the publisher has published a work not previously serialised in the publisher’s weekly and monthly anthologies.

With incredible veracity and a feel for the period, Adams and Broxton uncover the touching story of the creators behind the ‘60s most surprising secret agents. This volume collects together an archive of ‘behind the scenes’ material of the strip that never was – letters, scripts, interviews, sketches – all documenting the creation of the strip and the outlandish lives of its creators and their unbelievable brush with 2000 AD.

Of all the Sixties newspaper strips, one of the most discussed has to be Antonio Barreti and Louis Shaeffer’s Goldtiger. Uncollected until today, this astonishing book lifts the lid on comics’ most unsung creation and also reveals its incredible connection to British comics icon and the Galaxy’s Greatest Comic, 2000 AD!

Working with Shaeffer, a writer entrenched in the world of crime and sci-fi pulp magazines, Barreti produced the first serial in its entirety. Deemed too sensational – not least because both of its main characters were openly homosexual – the strip was cancelled, but even Barreti’s mental breakdown didn’t hold him back, he continued to write Goldtiger and later mysteriously vanished.

Using extensive restoration techniques and after many years of scouring the archives, Goldtiger is ready to be presented again, complete from the very beginning and starting with their debut adventure The Poseidon Complex.

“This extraordinary secret history is something that we had to see revealed. 2000 AD’s history of bestselling archive collections, from The Daily Dredds to our Judge Dredd: The Complete Case Files series is about to take the most unexpected new turn with Goldtiger.” Ben Smith, Head of Rebellion Publishing.

“Few creators could fail to recognise parts of themselves in Barreti and Schaeffer,” says Guy Adams, “one is the prolific hack, desperate to pay the bills and the other a principled artist, determined to kick against the pricks and get his story told, whether or not anyone’s willing to hear it.”

About Guy Adams:
Guy Adams has made so many things up he’s at risk of becoming fictional himself. He’s the author of the Clown Service series, the Heaven’s Gate trilogy and the Deadbeat books. So, that’s weird spy novels, weird westerns and weird crime thrillers. Perhaps, gentle reader, he’s a bit weird. His current project is a frankly ill advisedly epic series of YA novellas called The Change. He also writes comics: Ulysses Sweet: Maniac for Hire, Rogue Trooper and Voodoo Planet for 2000 AD and The Engine for Madefire.