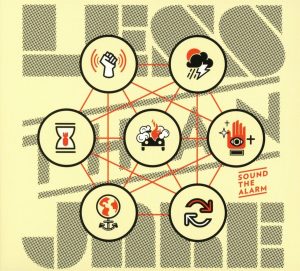 Okay, I’ll make this easy for you. Everyone loves Less Than Jake. Or at least has a soft spot for the high octane, straight out of Gainesville, brass heavy, melodic punk rock machine. I don’t care how punk you claim to be, or how metal you think you are, as soon as these cats fire up their amplifiers and hit their stride, you’ll be singing along in next to no time. I’ve slammed the night away alongside dog chain having, GG patch wearing, cider addled, three foot Mohican styling punks who usually subsist on a diet of obscure Swedish D-Beat bands you’ve never heard of and denim and leather bonded, regulation mullet sporting, stinking of motorcycle oil metal-heads who believe that the musical dictionary begins at AC/DC Ville and only stops at Iron Maiden County and Saxon Junction before culminating at WASP City, while watching Less Than Jake kick up a riot on stage. Those dudes that I was in the pit with? They had shit eating grins plastered all over their faces and it was probably the happiest they’d been since Dickson returned to the fold and Discharge reformed. And you know why they were so damn happy? They were happy because they were listening to Less Than Jake. And everybody loves Less Than Jake.

And everybody (which is, you know, absolutely everybody) who loves Less Than Jake is gonna love Sound the Alarm. Why? Because over the course of the seven new tracks on here, LTJ do what they do best: they play up tempo, catchy as hell, ska-driven pop punk that makes you want to dance until your Converse fall apart and sing-a-long with each and every one of the choruses until you’re fit to puke. At which point, you’ll chuck your guts up and start singing again. These guys aren’t trying to reinvent the wheel and they’re not attempting to construct complex musical algebraic formulae in order to push the boundaries of math-rock. They don’t need to do that, because they’ve got their own groove, they’ve got their own sound and on Sound the Alarm they stick to, and don’t deviate from, it and the end result is…Pretty freaking awesome. Because everybody (and yes, in case you’re wondering, everybody does includes me) loves Less Than Jake. And everybody will love Sound the Alarm… Tim Cundle