Since their inception in 1988, Detroit’s Cold As Life have had to cope with numerous line up changes, incarceration and even murder. With a reputation as one of hardcore’s most brutal bands they make their long awaited return to the U.K in April. We spoke to drummer Roy Bates and bassist Craig Holloway to see what’s been going on since they were last in the U.K, nearly 10 years ago.

MM: Looking forward to seeing you in the U.K again, it’s been 10 years since we last saw you. What’s changed in the Cold As Life camp? Who’s in the current line up?

CAL: Thanks! It is hard to believe it’s been a decade since we last played in the UK. We’re excited. It will be great to see old friends and make new ones, as well. We’re also looking forward to performing the best show you’ve ever seen Cold As Life play. As you can imagine, a lot has changed in a decade. Our line up now consists of Jesse Adkins on Vocals, Matt Martin on Guitar/Vocals, Craig Holloway, who was an early member of Cold As Life, returning on Bass and Roy Bates (me) on Drums.

MM: Going back to the beginning. Cold As Life were born from the streets of Detroit, in the 80’s, a time where unemployment was at an all-time high, as was violent crime and gang activity. Do any of you guys still live in Detroit, have things changed much since those days?

CAL: Yes, with the exception of Craig who lives in Austin, Texas, we all still live in Detroit metro. Our city was in shambles. Not only did it look like a war zone it WAS a war zone. Detroit was a city full of corruption, drugs and violence. Both Detroit and Flint, Michigan were hailed murder capitals in the U.S. for years and in many ways they still are. However, in the last 5 years the downtown area has cleaned up a lot. Thriving new business, new jobs, new sports arenas and commerce has led to people living in the city again. It is a great change for Detroit and the people who live here.

MM: When I was getting into hardcore in 93-94, I was always reading about this punk/oi band Cold As Life, but couldn’t get hold of anything until Born To Land Hard dropped in 1998. It was an instant game changer and is still one of my favourite h/c records of all time. Was it a conscious decision to change the sound from your earlier material?

CAL: No, I feel the music changed with the times and with time, we got better on our instruments and song writing skills. We also have had a lot of member changes and losses through nearly 30 years. Different members bring different attitude, influences and different ideas. No matter how it has changed, I feel you can always hear it is Cold As Life when you listen to it.

MM: Back in the day you were name dropped quite often by some of the NYHC bands, including Madball who wrote CTYC (RIP) after murdered front man Rawn. How did that relationship begin and are you still in contact with those bands?

CAL: Our relationship started 1990-91. We played a show with Agnostic Front at the Capitol Theatre in Flint, Michigan. Roger & Vinnie were kind enough to invite us to play a show in New York City at CBGBs. It was our first out-of-town show and it was amazing. It’s still one of my most memorable shows ever. From that point on, we have always remained friends. Craig, our bass player, illustrated the cover for Agnostic Front’s Warriors and a few of AF’s memorable flyers and tour posters. Freddy, Roger, Vinnie and all the East Coast fellas have always shown us a lot of love and support. We are very grateful and can’t wait to do more shows with them in the future.

MM: There was a documentary in production about Cold As Life called A Detroit Story. Any news on that?

CAL: The documentary never got finished. Wrong timing, lack of funding… We might think about doing something in the future but for now we just want to stay focused on our music and touring. We might come back to it when the time is right.

MM: What keeps you guys motivated to keep doing this after so many years?

CAL: Perseverance and steadfastness in doing something despite difficulty or delay in achieving success. Just like the city we dwell from, we overcome adversity, sorrow and change.

MM: Since your inception the H/C scene has gone through many changes and now has many different identities. What does the H/C scene mean to you guys in 2017?

CAL: Hardcore is not a trend or a fashion statement that we follow. It has been a part of us most of our lives. It’s who we are. From one generation to the next, I’m sure people get different concepts on what it is, but to us it’s always been about unity, respect, perseverance and love for the music.

MM: Tell us about Cold As Life’s best /craziest ever show?

CAL: Most of our shows are crazy. We play intense, angry, stressful, pissed-off, aggressive music from the heart. That tends to make people act and express themselves in crazy ways. We are not trying to promote violence nor do we want to see anybody hurt, but it does happen. There’s definitely nothing better than seeing an aggressive, badass pit going off to our music with no malicious intentions. The best shows we played are still yet to come.

MM: It’s been 17 years since Declination of Independence. Are there any plans to record new material?

CAL: Yes, it has been a long time. We have been pre-recording and writing new material the last few months. We will be releasing two new singles Suffer and For the Few in late February on digital download with three new t-shirt designs by Craig Holloway. We hope to have the full length album ready by the end of 2017.

MM: What are your plans after this European tour? What does the rest of 2017 have in store for Cold as Life?

CAL: Our plans include a lot of touring and studio time. We are looking forward to what the future holds for Cold As Life. 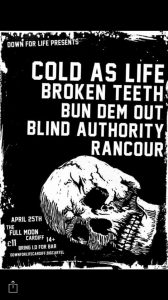 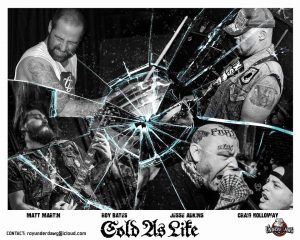 Hit up, and find out more about, Cold As Life on Facebook or the world wide internet web