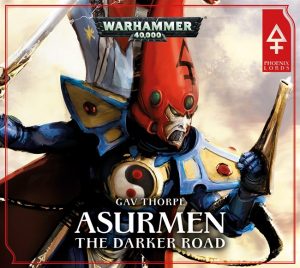 One of the stereotypes and tropes of Fantasy fiction and role playing games is the quest storyline. While some far more learned and enshrined in both of the aforementioned may argue that it’s over-used, I like to think that the reason it’s become so closely associated with gaming and genre fiction is that it’s an effective story-telling medium. And when it’s done well, as it is in The Darker Road, it’s nearly impossible not to enjoy and become fully engrossed in. Nearly in this instance meaning that you’d have to be dead, or some form of reanimated corpse whose sole focus was the consumption of brain matter.  The return of near mythical Phoenix Lord Asurmen to the Eldar Craftworld Ulthwe coincides with a Seer led expedition to find the Oracle of Hiron-athela, an object long thought lost and believed to hold the power to both save and guarantee the future for the entire Eldar race.  Willingly drafted, along with his Dire Avengers, into the mission Asurmen has seen enough of the Universe to understand the dangers they face, as the salvation and promise they seek lies in a part of space now occupied by the “primitive” mon-keigh. Venturing to a human (for that is what the rest of the galaxy calls the mon-keigh) held world is no easy task, and with conflict never more than a heartbeat away, the Eldar set sail for the Oracle.  No matter how difficult he thought the journey would be, Asurmen never expected to face the level of peril that he becomes immersed in, as the quest takes him to an impossible planet on which time and space warped towers are riddled with mystery, monstrous guardians and a final puzzle that none from Ulthwe could ever have anticipated.

Gav Thorpe’s cerebral and wonderfully realised drama incorporates elements of Greek and Japanese mythology into a plot that feels like a reimagined version of Kelly’s Heroes – if said film had been written by Larry Niven and Gary Gygax. And was, you know, set in the far future, in space and featured an ancient alien race as its main characters.  That said, Thorpe’s tale plays a rather clever trick on its audience and somehow, and don’t ask me how he does it but he does, anthropomorphises and humanises his hero and those accompanying him to the extent that you almost forget that they’re Eldar. But then, he wouldn’t reveal how he did it would he? Because the best magicians never tell you how it’s done. Thorpe’s literary wizardry is further enhanced by a stellar cast, led by the always excellent John Banks, Toby Longworth and Gareth Armstrong, who give their roles an extra homo-sapien touch that lends it an almost ethereal, timeless quality that, bridges the gap between magic and technology and fantasy and science fiction. Somewhere between the blade and the bolter, out on the rim of the warp storm lashed frontier, that’s where you’ll find The Darker Road. Find the pathway and follow it. You’ll be glad that you did… Tim Cundle