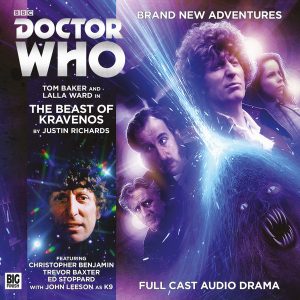 Tom Baker’s Doctor is as suited to all things Victorian and gothic as Noel Edmonds is to the hideous sweater and drawn-on beard, so if you like your Doctor Who with more than a whiff of Sherlock Holmes, this is one to download. (Disclaimer: calm down fangirls – this is not a ‘Superwholock’ production.)

The story begins in nineteenth century London, at the New Regency Theatre, where we are witness to an astounding new star wowing the audiences. It’s (to quote the Big Finish website itself – my apologies, but it’s a great bit of descriptive prose):  “The Modern Mechanical Marvel of Canny Canine Charisma! It’s the automated dog that can answer any question – the incomparable – the unbeatable – K9!”

So the Doctor and Romana are back in Victorian London and reunited with old partners in crime (and Big Finish fan favourites) Professor George Litefoot and Henry Gordon Jago. However this is no social visit. A terrifying crime spree is sweeping the capital (this is Victorian London after all), and the burglaries of a criminal known only as ‘The Knave’ appear to defy all logic. Naturally, this means that something impossible and highly dangerous is taking place amid the smog and filth of London’s back streets. Only the time travellers and their friends can stop it (as Jonathan Creek can’t time travel; a shame as he’d be great at solving this)… but can they be sure they’re all on the same side?

Teaming the fourth Doctor with Jago and Litefoot is like combining (crunchy) peanut butter with two kinds of chocolate. So much so, that after a certain point, the plot becomes almost irrelevant, as you, dear listener, luxuriate in the awesomeness that is Tom Baker, Christopher Benjamin and Trevor Baxter. That’s not to say that Justin Richards hasn’t  constructed a marvellously period plot.  What’s not to love about Doctor Who meets Jekyll and Hyde meets Raffles? And as if this weren’t enough, Richards has made brilliant use of K9, giving our favourite tin dog some beautifully corny one-liners. In a strange twist of circumstance, here’s a story that sees Tom Baker playing the part of John Leeson’s straight man (an opportunity Leeson is clearly enjoying).

If I have one niggle, it’s that Romana, played as wonderfully as ever by Lalla Ward, doesn’t really have much to do. I guess this is an unfortunate side effect of having to accommodate three larger than life characters (and the actors who play them), but it’s an awful waste of a brilliant character – and one of the few classic companions who could really hold her own when sharing the spotlight with a big personality. But hey – we can’t have everything.  Bex Ferriday