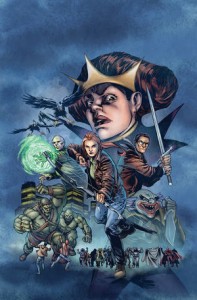 Originally published in Dark Horse Presents, King’s Road is now, finally, being presented in a mini-series format. In the first issue we are introduced to the new King of Avalon after his brother is killed by the Queen Malicia. Now, King Donal and his wife are also on her hit list in order for her to fully secure the takeover of the kingdom, and in order to do that, she also needs to kill their children Ashley and Tyler. Yet, to get rid of the rest of the royal family she has to send her minions to Earth as Donal walked away from his heritage to live a quiet life, but even here on Earth, the royal family has protectors, both known and unknown.

Writer Peter Hogan is off to a decent start with his series. While I didn’t like his revealing that there’s a traitor in the family’s ranks so early in the plot, as it ruined the mystery of how the family was found so easily, the rest of story was well done and still has enough energy and excitement left to keep the reader involved and wanting to see what will happen next. The real draw for me though is the artwork of Phil Winslade, and new to the series Staz Johnson, because it reminds me of Bernie Wrightson’s work, as does, incidentally, the colouring. King’s Road is a decent start, bar my plot based complaint, to what could be a great series once all the pieces and main story arc are both in place and in play. Jason Bonton