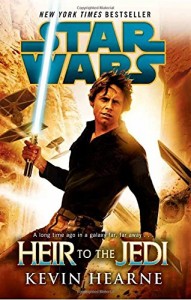 It’s not everyday that I pick up a book written purely in the first person, let alone from the perspective of the Jedi himself, Luke Skywalker. Since a number of previous novels, comics and other media are no longer considered canon in the Star Wars franchise due to Disney and Lucasfilm wanting to give new directors the freedom to create new and original franchise films, it’s left the door wide open for a slew of fresh, original novels to take place between the events of the original trilogy and the prequels. Kevin Hearne seizes this opportunity with both hands and delivers a thrilling, humorous, heartfelt story which takes place shortly after the events of Star Wars: A New Hope. Hearne’s story provides an insight into the young, future Jedi, still fresh from his farming life on Tattooine, still coming to grips with life after destroying the Death Star and after losing his brief mentor Obi Wan Kenobi. He embarks on a daring mission for the Rebels with R2-D2 and new love interest Nakari to liberate a brilliant, alien code-breaker named Drusil.

Hearne manages to effortlessly capture the spirit of the original trilogy in his writing, by developing strong, likeable characters with whom you feel an attachment. The book doesn’t let up on action and thrills and tinges it all with a little, tongue in cheek humour here and there. One of the key things for me that Hearne manages to achieve, is addressing some big questions that fans felt needed answering after watching the original trilogy. He eases you into Luke’s mindset, one where he still idolises his Jedi father Anakin and is desperately tryong to understand The Force without a mentor to explain its intricacies to him. A great addition to the franchise for any Star Wars fans out there… Drew Hamley