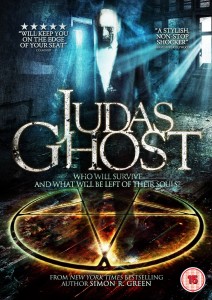 Judas Ghost (Sony)
Wow, this is how you make a decent film for a pittance! Basically featuring just four people (and a ghost) in one room (a church hall), you couldn’t go much more basic than this, and in less capable hands, this could so easily have been a total flop. But Simon Green’s screenplay – based on his own ‘Ghost Finder’ series of books, that revolve around the Carnacki ghost hunting institute … a group of experienced ghost hunters that ‘Don’t take shit from the Hereafter!’ – is tautly captivating and dripping black wit. Thankfully the sparse cast buy into all the nonsense about beasts from beyond and play it dead straight like their lives depend upon it, all of them very watchable, but especially Martin Delaney as smug group leader, Jerry McKay, and Lucy Cudden as unfeasibly attractive psychic, Anna Gilmour. The effects are occasionally a little ropey, but what do you expect on a shoestring, and to be honest, it doesn’t matter that much, because the film grabs you and you actually believe in these characters, never mind how preposterous the situation they find themselves in. At 75 minutes, it wisely doesn’t outstay its welcome either, every line of script and every plot turn serving the storyline. Gore and violence kept to a minimum, this relies instead on its spooky concept and creepy tone to jar the viewer’s nerves – and it largely succeeds. A pleasant surprise indeed then, and a clever film that manages to punch way above its weight. Ian Glasper