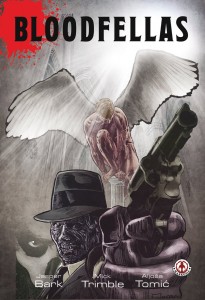 Bloodfellas – Jasper Bark, Mick Trimble & Aljosa Tomic (Markosia)
You know that old saying, ‘It’s a nice place to visit, but I wouldn’t want to live there’? That’s what I imagine it’s like in Jasper Bark’s mind. A truly terrifying place where nightmares are born and all manner of twisted scenarios are brought into being. The latest of these epic tales of horror and subverted reality, ‘Bloodfellas’ offers its readers the opportunity to roam freely for a couple of hours inside that place and thoroughly enjoy it’s grizzly delights before returning to the safety, warmth and slightly confining comforts of our own imaginations. After all, too much of a good thing can be bad for you, and too much exposure to the strange worlds of Jasper Bark can overload even the strongest of minds and wills.

Talking of strange worlds, this time Jasper, accompanied in his endeavours by the exquisitely talented Mick Trimble and the colourist extraordinaire Aljosa Tomic takes us on a journey to Atros City, a fictional city in an alternate thirties era US of A where the undead “Zombioso” control the criminal underworld. It’s a tale of colliding lives, of love, hope, fear and fate that plays out against a back-drop of the battle to control the gateways to Heaven, Hell and the afterlife and the people, living and dead, mortal and immortal, whose destinies are directly intertwined with the future of the next world and is an exemplary ode to the halcyon days of EC’s horror and crime comics, that, thanks to Trimble’s magnificent retro, period art and Tomic’s eye for detail, looks as good as it reads. ‘Bloodfellas’ questions the nature of life and death, the cyclical nature of existence and examines the common bonds that link all religion, faiths and practices, while delivering a wonderfully involving plot full of characters that wouldn’t be out of a place in the pages of a Chandler pot boiling page turner. Or, more accurately, they wouldn’t be out of place in one of his books if old Raymond had been strung out on LSD and fuelled by a divine madness granted him by things from beyond the dimensional veil while writing them. Which is exactly what this gloriously over-the-top, hugely inventive and original book is like. It’s a violent, brutal, pulptastic rollercoaster ride through the darkest reaches of a fabulously, fevered, creative mind, and if you’re anything like me, you’ll enjoy every damn second of it. Buckle up kids, its show time… Tim Mass Movement