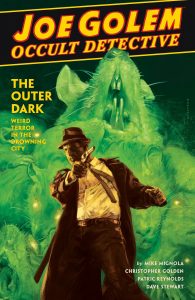 Joe Golem, the more than human private eye who with the help of his mentor, the impossibly old, Simon Church investigates the strange, weird and downright odd in the semi-submerged New York of the nineteen sixties on an alternate world, or reality, returns to do battle with the forces of evil once more and this time, both his past and the darkness hidden within it are slowly beginning to catch up with him.  Settled in a steady relationship yet plagued by nightmares of witches, The Outer Dark begins with Joe being thrust into a case involving Nazi’s and a plot to discover the “wisdom” of Elder Gods from unseen realms that stretches back to the dying days of the First World War and that’s left a brace of corpses and a puzzled and befuddled NYPD in its wake. Joe, knowing that evil and the servants of the Third Reich walk hand in hand, races against time to stop the Teutonic agents of destruction doing any more damage than they’ve already done but soon finds that when certain doors are opened they can never be closed and that some invitations aren’t so easily rescinded.

After tangling with Nazi’s, and at loose end despite his personal life gradually disintegrating around him, Joe finds that he has no choice but to believe in ghosts when he stumbles across a building that may or may not be haunted and whose owner isn’t exactly who she appears to be. While Joe is busy fighting spirits, his partner and friend, Mr Church begins to reveal his true colours, dabbling in his associates affairs by revealing Joe’s true origins and history to his lover which, given that Mignola and Golden are masters of the long game and love to slowly build their underlying plots and themes, will no doubt eventually lead to some sort of incendiary showdown between the investigative duo.  And with his history now out in the open, at least as far as those of us safely behind the fourth wall are concerned, it’s almost certainly only a matter of when, not if, until Joe finds out who he really is, and when he does, all Hell will break loose.

Christopher Golden and Mike Mignola are one of those dream team partnerships, two fantastically gifted and imaginative writers with an innate ability to tell an enthralling story, who intuitively understand each and bring a Midas touch to everything they work on together. Blending fastidiously detailed alternate history, fully fleshed out and rounded three dimensional characters, Lovecraftian horror and Marlowesque noir in a rip roaring, period adventure that thanks to the gorgeous, pulp infused art of Patric Reynolds is given a sense of period, time and slightly eerie other worldly place, Joe Golem proves that when it comes to writing horror comics and stories about the things that go bump in the night and the heroes who bump back, the undisputed, and unbeaten, champions of the genre are Mignola and Golden.  Fantastic… Tim Cundle