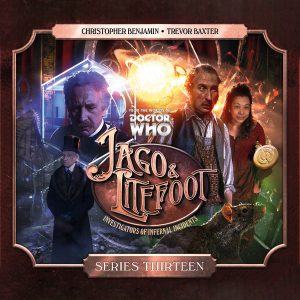 Thirteen series, eh? It’s a number that’s unlucky for some supernaturally inclined folks, but not it would seem for the intrepid investigators of the rum, the bizarre and the downright weird. That’s right, they’re back. Henry Gordon Jago, theatrical impresario extraordinaire and Professor George Litefoot, London’s most noted pathologist, are on the case again; although this time their penchant for finding all manner of infernal trouble propels them into a case that takes them further from home than they’ve ever been.  And it all begins so – for them anyway- seemingly innocently. After suffering from mysterious waking dreams the Universe ups the pressure on the boiler marked “steam-powered adventure”, straps Henry and George to it and releases the valve in one fell swoop, propelling our determined duo into a multi-versal, alternate Earth based escapade that hurls them into the wake left by their oldest foe, Weng-Chiang.

Crossing paths with a Time Agent searching for Magnus Greel, The Stuff of Nightmares pits George and Henry in their battle with fate when she eventually tracks down two of the last people to see him, but duelling at cross purposes she ends up being responsible for transporting the plucky practitioners of law and order to a very different London. It’s here in Chapel of Night that they end up, once again, saving the world from an invading would-be horde whose origins are remarkably similar to their own, proving that no matter where and when they are, George and Henry are always ready to battle evil in all of its facets and forms.  Of course, it isn’t long before the spectre of Greel once again raises its twisted, ugly head and in How the Other Half Lives, they not only end up face to face, and teaming up, with their parallel Earth selves, but also run into the infernal Investigative partnership that defends their new home, and together they prevent Weng Chaing’s devilish machines embedding their talons in London.  Which, brings us, in breathless fashion and a state of nervous and excited agitation, to the final chapter of this brace of scientific tales of daring do, Too Much Reality, in which Henry and George once again test their mettle against a familiar enemy before discovering that there may actually be a way home, and out of the sticky situation they’ve found themselves in, after all.

Jago & Litefoot, with thirteen seasons of stories (and the odd special here and there) under their belts, may be getting on a bit now, but like the finest Cognac and Port, they just seem to keep getting better with age.  Incorporating alternate history and multiverse theory into the story not only allows George and Henry to meet themselves, which much to the listeners pleasure gives Christopher Benjamin and Trevor Baxter a chance to flex their considerably large thespian muscles a little more, it also adds a touch of the ‘What If’s?’, the eternal question that each of us has pondered at some point in our lives, to proceedings. The writing is a near perfect fusion of drama, dialogue, plot and characterisation and is, as ever, delightful and with a cast of lead and supporting heavyweights (including the always excellent David Warner) performing it, Jago & Litefoot Series Thirteen leaps out of the speakers, grabs you by the bally throat and shakes your noggin up something fantastic before letting go and leaving you in a daze, desperate to repeat the whole thing again. Let’s hear it for George and Henry; they’ve saved the day again…  Tim Cundle