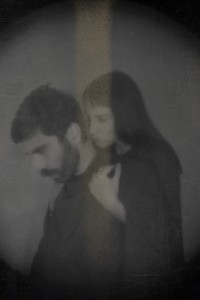 One of the most mysterious and enigmatic musical entities to come out of Italy in recent years, Father Murphy, has announced a new full-length album that will be available March 17th from The Flenser. Titled Croce, this new collection of dark psychedelic/industrial cabaret is a concept record about the cross (yes, it’s THAT cross – ‘croce’ in Italian), with one side of the record sonically representing the suffering and sacrifice and the flip side reflecting what comes after; the end of said suffering, resurrection, or perhaps oblivion. This album marks the band’s fifth full-length release of their extensive catalogue (discography can be found below) and was recorded by John Dieterich in Albuquerque, NM and mixed by Greg Saunier earlier this year. Watch the teaser video for Croce here.

The sounds Father Murphy creates on Croce are shadowy, the atmospheres muddy and murky, from which spring unexpected blurts of impossibly catchy noise pop, approaching at times something almost operatic, like some twisted musical detailing the trials and tribulation of the crucifixion. Male and female vocals by Freddie Murphy and Chiara Lee intertwine over distorted blasts of guitar crunch, anchored by stuttering homebuilt percussion. This sound is both textural and nuanced but also noisy and chaotic, and that chaos is carefully sculpted into jagged shards of fragmented pop, and that pop oven into a dramatic, almost theatrical song suite.

The first side of the 8 song, 36-minute album finishes up with the song “In Solitude”, an appropriately dour slab of murky miserablism that sounds like a slow sonic death, a haunting dirge that dissolves into that ineffable space that exists between the record’s second side; the netherworld, the afterlife, Purgatory even. But Father Murphy erupt from this stygian blackness with the second half of Croce (meant to be the light to the A side’s dark) and yet the opener is still somehow strangely doomy; a field of metallic shimmer and more junkyard percussion, strung together into a spare framework, over which dramatic male vocals soar, the female vocals responding like some demonic Greek chorus, but true to the theme, the vibe grows strangely warm. Croce’s finale, “They Won’t Hurt You”, is all majestic pipe organ, a stirring and stately court music, lush and lovely and epic, the sound of rebirth, redemptive and ultimately restorative, a return from the beyond, arisen from the grave, ascended into the heavens, the sounds drifting upwards, beyond the galaxy, the universe, into the unknowable infinity. Croce is yet another masterpiece in Father Murphy’s pervasive and provocative story.

2015 will see Father Murphy touring once again – they recently closed out US and Canadian dates with Iceage and upon their return to Europe, played a set at Michael Gira’s Mouth to Mouth Festival in The Netherlands – this time in support of Croce. Look for tour dates, song premieres, and more information to come soon.