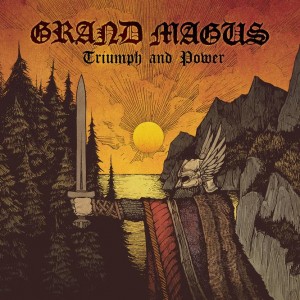 Swedish riff lords GRAND MAGUS have premiered their new video for the track ‘Steel Versus Steel’, which can be viewed over on YouTube, HERE

UK fans can catch the band’s last shows of 2014 in less than a week as the guys will be supporting Behemoth alongside Decapitated and Winterfylleth on the forthcoming UK tour:

Triumph and Power was released at the beginning of this year via Nuclear Blast. The album was recorded at Studio Sweetspot in Halmstad, Sweden in September 2013 with producer Nico Elgstrand and engineer Staffan Karlsson (ARCH ENEMY, SPIRITUAL BEGGARS). The artwork was created by Tony Roberts (CONAN).