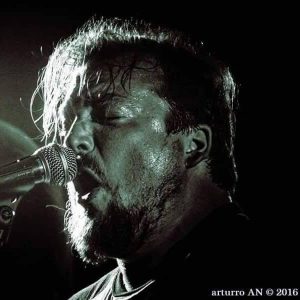 Photograph by, and courtesy of, Arturro AN

I think there are two defining moments for me. The first one was when I heard Nirvana’s Nevermind for the first time and it blew me away. I was 8 years old and I was completely hooked, I’d only really heard Dire Straits and Fleetwood Mac until then. It made me want to play guitar and start a band, and six years later I started my first terrible band called Dammit. Our first gig was in our garage when. I was maybe 15 or so. Our drummer quit before we played so me and my brother played the set with no percussion at all and our vocals through a keyboard amp. It sounded fucking awful and our voices hadn’t even properly broken. My mum kicked out people as they got drunk. It was pretty bad. But it was also the greatest day of my life because I found the thing that makes me happy, and I think as an adult it’s really important to hang on to what makes you happy – they’re harder to come across the older you get. Anyway, fast forward 15 years after all that and I’m in a touring band putting out records on a regular basis…15 year old me is very, very happy about that. Although adult me would like some money in the bank.