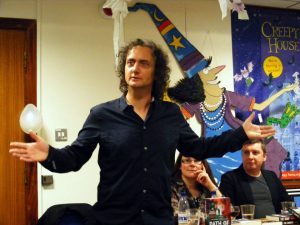 Mass Movement: With all of the scary things going on in the real world these days how do you keep your writing disturbing enough to compete?

JB: It’s certainly a feat. I think it helps that I’m already severely disturbed, so I have something of a head start on everyone else. As real world events creep up on the rest of the population, and their sanity begins to tip over the edge, I’ve already leapt way into that bottomless ravine, so in a way, they’re simply entering my world. Suddenly the things I write begin to have more relevance, make more sense and aren’t so far out there. You might even say that real world events are conspiring to help sell more of my books.

MM: What is the scariest thing you’ve seen during 2016?

JB: When I first thought about answering this question I was going to say something rather glib or a bit off the wall. However, upon giving the matter a little thought, I have to say the scariest thing I’ve seen during 2016 is the rise of intolerance. People are becoming a lot less tolerant of other people’s beliefs, political views and especially the differences that arise out of race and background. It’s being stoked, and exploited, by a lot of unscrupulous people who hope to use it to further their own political and economic ends and it’s not going to end well. 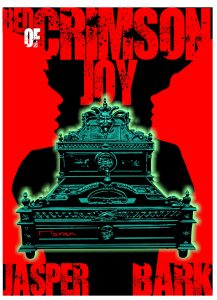 JB: Interestingly enough, whenever there is an economic downturn, or a time of political unrest, then sales of horror films and horror books always rise. It’s as though people need a safe and controlled place to put all their fears, anxieties and angers, and horror fiction provides them with the perfect vehicle.

Increasingly politicians are using fear as a prime motivating factor to rally support for their campaigns. Panic is also a great way to stimulate economic consumption, which is why our news reporting is reaching an hysterical pitch, because that benefits the news station’s many sponsors. In this kind of climate, horror fiction becomes a natural medium for commenting on the world around us.

It is also pretty good for the bottom line of industrious horror writers. Now I’m not saying that Hilary and Donald (not to mention Britain’s UKIP party) are in the pay of the Horror Writer’s Association but … hey wait a minute, maybe I am saying that. I mean, when you think about it, it would have been a pretty astute business move, all things considered …

MM: Will the current political turmoil make it too difficult for you to cover yourself in blood at your public appearances?

JB: I actually have a special deal with several cleaning agencies who specialize in clearing up after political rallies and debates. They’re collecting blood for me to drench myself in at public appearances. So far it’s going so well I estimate that I can go gore soaked until 2058. In fact it’s becoming rather embarrassing explaining to my wife why I’ve got so many large vats of blood in our garage. I mean there’s only so many times you can use that old excuse: “I’m sorry darling, I’m actually a vampire, look – it’s a lifestyle choice, okay?”

MM: How are your new books selling? I mean they’re all awesome but are the buyers out of their fear-induced states of catatonia and able to head back to Amazon?

JB: Well the fact that I’ve had three books out this year, in as many months, The Final Cut, Run To Ground and Bed of Crimson Joy has meant an increase in interest in all my books which is very welcome. I’ve also had a lot of glowing reviews on Amazon and Goodreads too, which is very welcome. However, I’ve not had my royalty statements yet, so I can’t give you a definitive answer, but neither of my publishers have released the winged mutants to tear me limb from limb for failing them abjectly, so that’s a good sign.

MM: It seems that haters are coming out of the woodwork these days. Have you been subject to verbal attacks in reference to your work? How do you respond?

JB: I don’t want to tempt fate, but I’ve been lucky enough to avoid most haters so far. The only really hate I felt was for my third novel Dawn Over Doomsday. It really wasn’t liked by the British critics and the reviews often devolved into personal attack. You were one of my few champions at the time actually Jim. The reviewers have been very kind to most of my other books, but that one sadly seems to be the ugly kid of my literary litter, which is a shame, because I still like it.

Knowing how to respond to hate is never easy. The last thing you want to do is provoke more hate and cause an already fraught situation to escalate. If I respond at all, it is to try and uncover what the real source of the hostility is, and to try and rectify things. Especially if I have offended someone without either knowing it or meaning to.

MM: What would the main theme be if you ever wrote a memoir?

JB: I think it would probably be ‘How to Skin Friends and Ambulance People’. A gentle little tome full of whimsy, detailing my attempts to spread peace, love and reconciliation throughout the many nations of the world by writing graphic descriptions of death and dismemberment. I fully expect it to set the best seller lists alight someday. 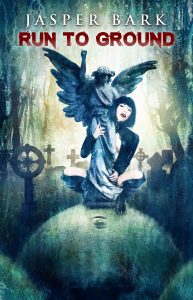 MM: What would the main theme be if your daughters ever wrote an autobiography of their father?

JB: Well hopefully it wouldn’t be a misery memoir, or a tale of survival against the odds.

I have quite different relationships with both my daughters, so I’m guessing they would choose quite different themes for their biographies. Freya, my eldest is a few weeks from turning sixteen, as I write this. We swap films, books and albums all the time, go to the movies, to the theatre and to cons together. So I imagine Freya might write about what it’s like to raise/be raised by one of your best friends.

I have a far more traditional, parent/daughter relationship with my youngest Ishara. I was going to say a ‘father/daughter’ relationship, but I am as much of a mother to her. Ishara and I tend to bond over the fact that we have a bizarre and somewhat lunatic sense of humour, that only we seem to understand. So maybe her theme would be: ‘When your father is your mother but he’s the only dad you’ve got and the only person who gets your jokes.’ 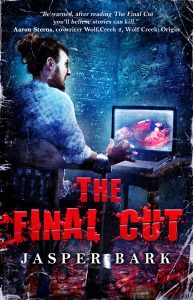 MM: We know that you have two books that were recently released, Run to Ground and The Final Cut. What’s next in the life of the horrific and regal Jasper Bark?

JB: Don’t forget the erotic and disturbing novella Bed of Crimson Joy which also came out recently from Knightwatch Press. I’ve also just had a new novella appear in the exceptional anthology Great British Horror 1 – Green and Pleasant Land, the novella is called Quiet Places and takes up nearly a third of the anthology. It’s also part of the Heresy series, a story cycle dealing with the Qu’rm Saddic Heresy, of which Run To Ground and The Final Cut are also a part. The novella contains no blood, guts or gore whatsoever. There’s no graphic sex or violence and no-one gets even so much as a paper cut. But even still, I suspect it may be the most disturbing thing I’ve written so far.

In other news, my infamous novella Stuck On You has just come out as an audiobook, read by the talented Joe Hempel. Plus Markosia, who published my graphic novel Bloodfellas, are collecting Parassassin – the political sci fi thriller I wrote for David Lloyd’s award winning webcomic Aces Weekly, illustrated by Alfa Robbi, which will hopefully be out at the beginning of 2017 with a lot of material that is original to this new edition.

I’m also about to launch a Patreon page and a webcomic which you can get a sneak preview of right here and I’m planning to do a lot more with my myYouTube channel, which you can see here In addition I have a bunch of commissions in the pipeline and a couple of collaborations which I will remain annoyingly vague about.

MM: When you finally do conquer the world, what type of life can all 7 billion of your subjects expect?

JB: I will change every country’s national anthem to the theme tune from The Adams Family. Washington, Jefferson, Lincoln and Roosevelt will be replaced on Mount Rushmore with Jason Vorhees, Freddy Krueger, Michael Myers and Pinhead and every representative of the United Nations will be forced to wear a Leatherface mask.

Education however, would be the central pillar of my regime. I will replace math lessons in high school with compulsory viewing of all eight Saw movies (including Saw: Legacy), make sure to concentrate though, there will be a pop quiz. Other important life skills that I’d add to the curriculum would be how to sound clever in early morning planning meetings, in spite of having only left the bar two hours ago, and how to respond to an unwanted dick pic when you’re too drunk to actually see your phone.

Other than that, expect a utopian existence of peace and equality, where the whole world comes together to toast marshmallows over the burning corpses of politicians and the international banking elite.