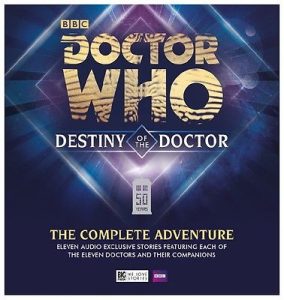 Not to be confused with the PC game of the same name released during the late nineties, Destiny of the Doctor is a series of linked adventures featuring the first eleven incarnations of everyone’s favourite Timelord. It was originally released during the fiftieth anniversary year in 2013, starting in January with Hunters of Earth with one release following each month; eventually culminating in November’s the Time Machine. And now Big Finish have gathered the series together in one (relatively) easy to digest box, so you can relive, or even experience for the first time, the Destiny of the Doctor in all its glory.

The epic adventure begins in London 1963 with the First Doctor and Susan and from there the saga moves from location to location with such settings as a dead world circling a pulsar to an encounter with Christopher Columbus in 1492. At some point in each story the Eleventh Doctor makes a cameo appearance giving cryptic instructions to his previous selves and for me that is a highlight of each episode in this galaxy spanning yarn. Then, finally, all the pieces of the jigsaw finally come together in The Time Machine as the Eleventh Doctor fights to save the universe itself.

From a meeting with Harry Houdini to terror on deadly planet hailed as the most dangerous world in the universe, these tales feature a wide and varied range of ideas that show the Doctor in a multitude of different lights and revolve around an intriguing central plot and story arc that links the whole thing together.

In so far as the performances are concerned, I hate to single anyone out, but in this case I really must as Frazer Hines’ performance is the highlight of the piece. Aside from being, as always, fantastic as Jamie McCrimmon, his staggering impersonation of the late great Patrick Troughton is uncannily accurate and if you didn’t know better, you’d swear you were actually listening to the Second Doctor. That’s not to say that everyone else doesn’t put in a great turn, because they do, with Nicholas Briggs being particularly good as Christopher Eccleston in Night of the Whisper. All in all, this box set is highly recommended as it’s full of great adventures and brilliant performances from the cast and characters of the last fifty three years of Doctor Who and celebrates a landmark in the shows history in fantastic fashion. Go on, treat yourself…  Nath Rixon