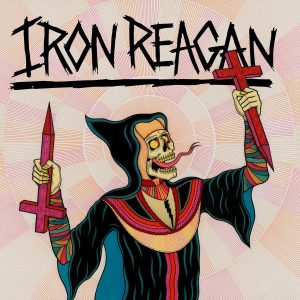 Lace up your high tops and grab your bandanas, Iron Reagan are back and they’re here to thrash. Launching straight into a full on slam assault with opening track Dying World, it’s all mosh systems go from that point on as Iron Reagan pilot their Boneless Ones meets Beyond Possession meets Excel style wrecking machine through eighteen slabs of Grade A, prime time, eighties flavoured Crossover classics. Hell, seventeen year old me would have skated his arse off to this record,  then turned the volume up and practiced his stage diving to it and after being amped up on Crossover Ministry for a couple of hours would have slammed around his bedroom until he collapsed from exhaustion. Yeah, the seventeen year old, spotty, thrash mad lunatic that I used to be would have loved this record. And forty something year old me loves it too. Although these days, I’m  content to just dig the shit out of it, nod my head to the insane thrash attack, absorb it in its entirety and get ready to do the aging thrasher thing the next time Iron Reagan play. That is, stand at the back at the show and complain about the kids.  Thrashing’s their business and business is good… Tim Cundle