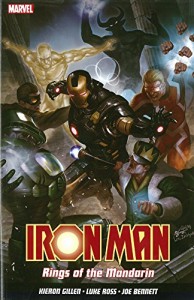 Iron Man: Rings of the Mandarin – Kieron Gillen, Luke Ross & Joe Bennett (Marvel / Panini)
Is there a single person in the Western world who – thanks to Marvel Studio’s blockbuster saturation of mainstream cinema – doesn’t know who Tony Stark is? I doubt it. But Arno Stark, that’s an entirely different matter. Unless, of course, you’re one of the smart kids who have already tuned into Kieron Gillen’s fantastic run on ‘Iron Man’; in which case you’ve been following the adventures of the Brothers Stark as they fight to protect the world from all manner of evil and make it a better place with their technological know-how and philanthropic inventiveness. Good, in that case, we can begin…

‘Rings of the Mandarin’, sees a new antagonist enter the fray, one who poses a particular problem for Iron Man, particularly as he is still in pursuit of the rings and people (known as Mandarins) that the rings have selected to wield their individual powers. With Malekith the Dark Elf embarking on the same mission, although for entirely different reasons, Tony finds himself having to fight magic with technology as the gap between the two becomes vanishingly small. And as Malekith is willing to do things that Iron Man never could in order to succeed, it’s a battle that becomes increasingly one-sided. And when the other Mandarins, arrive to join the party and prevent Malekith employing his usual techniques for acquiring what isn’t his, the whole getting the rings idea becomes a lot more complicated, not to mention dangerous. With allies turning on each other, former foes becoming friends and Pepper and Arno making his personal life more complicated than it ever needed to be, Iron Man finds himself in the middle of something that he wishes he’d never begun, and turns to someone he never thought he’d ask for anything to help him before everything spirals out of control.

The concluding arc of the current The Mandarin saga, which thanks to the mighty pencils and incredible talent of Luke Ross and Joe Bennett looks every bit as incredible and imaginative as the story itself, is a snappy, furiously paced tale that plays to Iron Man’s strengths; and from the word ‘Go’ plants it’s foot firmly on the accelerator and pushes it through the floor, only breaking furiously for the final glorious splash page. ‘Rings of the Mandarin’ is creative, intelligent story telling at its finest, full of fantastic dialogue, ideas and razor sharp characterisation that’s matched by a plot that refuses to pander to the lowest common denominator and its readers like they should be treated. Like the switched on, never-miss-a-beat, bright cats that they are, which in the increasingly modern world, is all too rare and as such, should be cherished and enjoyed time and time again. What more can I say? Oh yes, just this… It’s freaking awesome! Tim Mass Movement