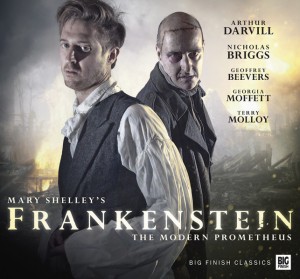 Frankenstein – Starring Arthur Darvill, Nicholas Briggs, Geoffrey Beevers, Terry Molloy, Georgia Moffett, Alex Jordan, Lizzie Hopley, Geoffrey Breton, Sarah Ovens, Stephen Fewell. Written by Mary Shelley & Dramatised by Jonathan Barnes – 5xCD / Download (Big Finish Productions)
What is the measure of a man? Is it how is he judged, remembered and regarded by others? Or could it be through his words, deeds and actions? Is it a combination of his life’s achievements? His heart? His soul? His intellect perhaps? These questions have never been posed more eloquently, or thoughtfully than in the terrifying events that play out in Mary Shelley’s ‘Frankenstein’; and few adaptations of her story have managed to capture the imagination, spirit and essence of her tale in quite the same way as this stunning dramatization.

There are, I’m sure few, if any, individuals unfamiliar with the story of Victor Frankenstein; his unrelenting obsession to challenge death, his unsated appetite to create life and his pursuit of both through the creation of his “creature” and the devastation that is ultimately wreaked on his own life and the lives of all those he loves as result of his hubris. It’s a tale told often, reaching into the core of the human condition, and one that never loses its impact; its central themes resonating as loudly today as they did when it was first published in 1823. While ‘Frankenstein’ has been adapted many times, a scant few of these versions have managed to capture the raw power that bubbles underneath – and finally breaks through – the surface of the story; but this latest dramatic production of the myth pushes its way to forefront taking its rightful place amongst the best of them. Succeeding, where so many fail to slowly and horrifyingly reveal it’s frightening, beguiling plot weaving its web as the players become caught and ensnared in its threads.

The performances are exquisite, in particular the frightening and electrifying Arthur Darvill as Frankenstein and Nicholas Briggs as his creation. The use of sound and effects is superb, and the source material is utilized to its utmost to help construct the period feel of the play. The result is a seamless, griping and fascinating production of the Shelley’s tragic fantasy. It would be all too easy to simply try and convey it’s sheer impact with words such as marvellous or breath –taking, but that’s exactly what it is, an incredible imagining of novel that each and every one of us is familiar with, one that manages to infuse new and exciting life into a tale whose every avenue I thought had already been explored. It is simply magnificent… Tim Mass Movement