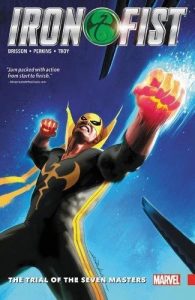 Danny Rand. The Iron Fist, sole defender of K’un-Lun and the living weapon imbued with the chi of the ever living dragon Shou-Lao has become something of a celebrity since Netflix optioned the character and beamed the resultant series (and later, The Defenders) into millions of homes around the globe. While it was nice to finally see Danny getting the kudos he so richly deserved and as a result joining the superhero A-list, for those of us who have kept the faith and been fans of his martial arts escapades since the late seventies* it was like we were being rewarded for hanging in there with him. And at long last the rest of the world got it. They saw the rich mythology and decades of canon that the character was steeped in and understood why Iron Fist was, is and should always be, at the top of the four colour food chain.

As well as being the author of Danny’s destiny, Ed Brisson is, I’m pretty sure, first and foremost an Iron Fist fan. Having read The Trial of the Seven Masters, it’s fairly evident that Brisson not only loves the character, but also understands everything that he is on a microcosmic level. He gets Danny and he gets Iron Fist, and his story plunges its self-doubting hero in search of purpose into a century old scheme designed by exiles from the land he’s sworn to protect that’s dressed up as a challenge  enacted to help restore his balance with, and place within, the Universe.  Equal parts high flying, bone crunching action and devilishly detailed and intricate plot, The Trial of the Seven Masters see’s Danny used as a pawn in a game played by a series of self-serving characters who all ostensibly want the same thing, but have very different ideas about how to achieve, and vastly differing motives for wanting to reach, their collective goal. And almost all of them are detrimental to Danny’s general well-being. But, the Iron Fist being the Iron Fist, he refuses to back down or walk away from the challenge and as the truth about his ordeal gradually becomes apparent, it just makes him fight harder and helps him rediscover everything that he thought he’d lost.

From beginning to end, The Trial of the Seven Masters feels like a John Frankenheimer  helmed Shaw Brothers epic, as personal desires, motives and drives collide with the, more often than not,  incredibly brutal action that the story is built around.  The cinematic feel of Brisson’s story is fuelled by the hyper-realistic , meticulous and precise art of Mike Perkins which brings Danny and the instigators of his trial to vibrant, fully formed life. This is exactly how an Iron Fist story should play out, fast paced, rich in plot, dialogue and characterisation and bursting with all manner of mind bending martial arts mayhem. Fantastic… Tim Cundle

*That would be me.