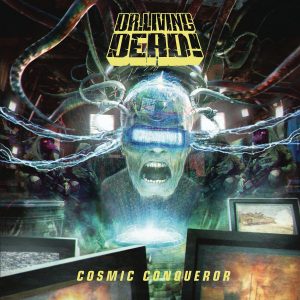 I swear, if I didn’t know better, I’d tell you that these thrash happy, masked crossover lunatics were from Venice Beach and that they’d originally embarked on their slamming mission at the tail end of ’86 or the beginning of ’87. But I do know better, and while Dr. Living Dead! play the same blend of high intensity, thrash heavy crossover as Join the Army era Suicidal Tendencies, Beowulf and Excel (with a touch of Municipal Waste thrown in for good measure) they do it without the endless sunshine, the perpetual sound of the ocean lapping the shore in the background and skate friendly urban landscape that their progenitors, and undoubted influences, called, and in some cases still refer to as, home. Being Swedish and hailing from far colder climes, but driven by the same energy, anger and musical aggression as the aforementioned bands, Dr. Living Dead!’s music has a slightly harder and edgier feel that updates the classic Venice sound and drags it kicking, ailing, screaming and thrashing into the twenty first century. And boy oh boy, can they, whoever they may be, thrash.  Get ready to be conquered, it’s thrashing time… Tim Cundle