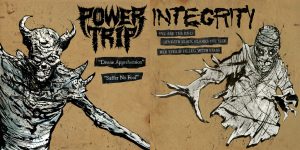 Integrity kick it off with the ferocious “VVe are the end” a remixed version of the track from their 2010 7” “VVe Are the End.” Those (like me) who are looking for something close to their classic material, need look no further as this is as close as it gets.  Big intro, rampaging d-beat drums and searing solos.  That’s not to say you shouldn’t look any further. Track 2 “Beneath Black Flames We ride” is a decent enough track, the problem is that Integrity have such a classic back catalogue, that you always expect more. The final track from Dwid and co is “Her Eyes is Filled with ϟtars,” a unique cover of the bizarre song that Howdy (Crispin Glover) serenades Stephanie (Jenny Wright) with in the 1989 film Twister.

The Power Trip material is exactly what we’ve come to expect from them recently. Two tracks of furious Overkill meets Cro-Mags riffs with that old school production that makes it sounds like it came out in 1988. Killer stuff, catch them in the U.K throughout May and June.

Wrapping up the whole package quite neatly, the multi-talented Dwid has also produced brand new artwork and layouts for this release and both bands are given a “co-headliner” visual presentation and a foldout poster containing all lyrics, credits, and additional original artwork.  There’s nothing new here for Integrity fans and is probably for the completists only, but Power Trip are well worth the money alone, so pick up this record as soon as you can ..… Chris Andrews