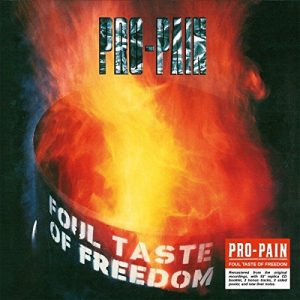 With fifteen studio albums now under their belt, this is where it all started for New York’s hardest working band Pro-Pain.  Formed in 1991 by members of New York’s legendary Crumbsuckers “Foul Taste of Freedom” took those hardcore roots and added other elements including metal and hip/hop to great effect. It was this combination that earned the band a fistful of award nominations and the respect of hardcore and metal fans around the world. Arguably Pro-Pain were one of the forefathers of the rap/metal scene that thrived in the mid 90’s.

Opening track “Foul taste of Freedom” is a prime example of their crossover roots, which brings to mind the likes of early C.O.C. I’ve no doubt that bands like Downset and Biohazard stood up and paid attention when they heard the likes of  “Death on the Dancefloor” and “Pound for Pound”, 2 early examples of good rap/metal. It’s not often that hardcore and trumpets are a good combination unless you are Sheer Terror, but Pro-Pain do a fine job with “Every Good Boy Does Fine”, classic 3 minute hardcore. More of that classic hardcore sound comes with ”The Stench of Piss” a solid slice of anger spat straight at us by Mr Meskil. His anger at the war in Iraq (at the time) is also addressed with the powerful “Iraqnophobia”. The album closes nicely with the pummeling “God Only Knows”, which to these ears, is slightly reminiscent of the classic Biohazard track “Punishment”. I wonder which came first?

With such an influential record, you wonder why Pro-Pain, didn’t go onto bigger and better things. It wasn’t the material. If nothing else Pro-Pain have consistently produced good records, it just seem that everybody else took their ideas and ran with them. Nevertheless, they have carved out a decent career for themselves and anybody into New York Hardcore could do a lot worse than pick up this re-release..… Chris Andrews