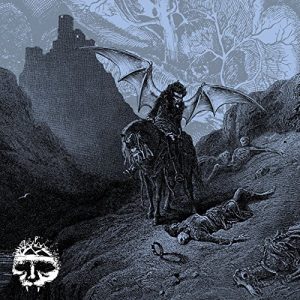 Apart from Dwid Hellion, I couldn’t tell you who is in Integrity these days. Since the halcyon days of the Melnick brothers, the band have almost become a one man project with Dwid and various hired hands. Nevertheless Integrity, who now call Relapse Records home, still produce some of the most brutal apocalyptic hardcore it’s been my pleasure to hear and I’m happy to report that Howling, For The Nightmare Shall Consume doesn’t spoil that record.

Having been a fan of this band for over 20 years, and loving (mostly) everything they’ve ever done, there’s always a bit of trepidation when hitting play on a new Integrity record. Opening track Fallen to Destroy/Blood Sermon sees the band bordering on black metal territory, but it soon breaks down into a murderous d-beat groove, the kind of which we have come to expect from, with searing guitar solo over the top. This kind of track is Integrity 101, it could have been on any of the previous releases and I love it. Dwid’s inhuman voice is in fine form on Hymn For The Children of the Black Flame, which is 2:17 of some of the finest hardcore I’ve heard this year. With its slow brooding opening riff, carrying the threat of something more sinister in the future, I Am The Spell will inevitably draw slight comparisons with Psychological Warfare from Humanity Is The Devil as will Serpent of the Crossroads which bears more than a slight resemblance to Abraxas Annihilation. Thankfully, Die With Your Boots On is not the Iron Maiden cover I was fearing, although it has tinges of that Maiden gallop. Unholy Salvation Of Sabbatai Zevi sees the band exploring doom/trad metal, all the while building to an ending Jeff Hanneman (R.I.P) would have been proud of. Dwid adds a bit of mischief to piss off the purists with String Up My Teeth and it’s pop style female backing vocals.

There are Integrity elitists out there who’ve not listened to anything by the band since 1996, but I would say to them, you’re missing out big time.  Dwid’s voice and vision are as terrifying as they’ve ever been. The problem with having such an immense back catalogue is that it’s tempting to try and bring back past glories, which this album is guilty of in some parts. But make no mistake this album is kick ass and never forget, even when Integrity aren’t at their best, they’re still better than everybody else… Chris Andrews