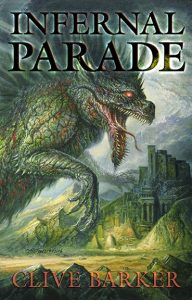 In 2004 Clive Barker and McFarlane toys released a series of figures about a traveling parade that included monsters, freaks, and the dead. The story was originally published as short noveletes in the Infernal Parade toyline with each short pertaining to one of the toys and lightly connected to a formation of a mysterious parade.

The Infernal Parade is broken up into six chapters, the first one being about Tom Requiem, a liar, thief, and con man, charged with murder and hanged for his crimes. After being hanged and buried, he is given a chance to lead a parade that will once again instill fear in humanity. Up next is Mary Slaughter whom Requiem killed. She has no love for Requiem and is there to keep an eye on him and through her newfound mastery of bladed weapons, will have no problem doing so. We’re then treated to a tale of spite and vengeance gone horribly wrong when Luis is taught to create a golem named Elijah in order kill his family. And we then move on to Detective Ralph Dietrick, hired by a doctor who lost what he calls his collection, for whom “details” are unimportant before being transported to the land of Thyle, whose vicious execution of jurisprudence unleashes a beast called The Sabbaticus. Last is the story of Bethany Bled, who went to extremes for love without knowing the price she’d pay for her actions in life. And death.

While this short novel is well-paced and snappy, it feels more like a novella and is instead what could best be described as the start of a longer story, one that would have so much potential if it was ever fully fleshed out. Don’t get me wrong, it’s incredibly engaging and the characters are wonderful, it’s just that it feels like it could be so much more than it is. Hopefully, one day, Clive Barker will return to the Infernal Parade and fulfill all of its promise… Jason Bonton