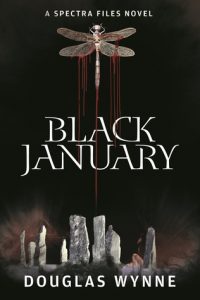 Those that have read my book reviews know I have a special place in my heart for stories with over, and under, tones of the Mythos. Yet trying to find books that have a continuing thread of some type from novel to novel, or story to story is sometimes like trying to find a needle in a haystack. So I decided to take a chance on Douglas Wynne’s Red Equinox which is the first Spectra files novel.

Black January, the second novel in the series, starts two years after the Red Equinox event with Becca Philips being called back to Massachusetts by Jason Brooks, who was also the only other person at the epicenter of the original event with Becca. This time though, Becca is lured back by the possibility that her missing father is involved with the Wade house, a place that is believed by some to be haunted, and by others to be a place where the dimensions intersect and can be traversed. Once there Becca, Brooks, and other members of SPECTRA try to figure out what is causing the influx of activity centered on the house and if it has anything to do with the fallout from the Red Equinox event. What they find is far more dangerous, as the house has become portal for the heralds of an Old One.

Wynne continues what he started in the first SPECTRA Files novel, which is building a world that is both familiar and yet has a darker edge to it thanks to the threat of Lovecraft’s near century old creations, Cthulhu and the other Elder Gods. More importantly though, Wynne advances and further establishes the characters of Becca Philips and Jason Brooks. The trust that is slowly developing between them, in a world that is becoming increasingly more hostile as their friends and family continue dying around them, makes them realize that no matter how much they try to distance themselves from it, they’re part of what’s going on whether they like it or not.

Black January is a fast paced novel that never loses any of its speed or tension. While the story resolves itself very nicely, Wynne also builds in enough loose ends to almost guarantee that there will be a third novel in the series. And I’m looking forward to reading it when it appears…  Jason Bonton