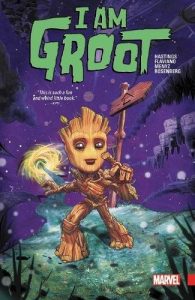 Groot is the Marvel Universe’s version of Robin Williams. He’s the guy who everybody, whether they’ll admit it or not, has a soft spot for and is almost* impossible to dislike. Even now that’s he’s all teeny tiny and the whole ‘Baby’ Groot, cutesy alien thing is being pushed to its marketing limit and beyond, he’s pretty difficult to dislike, even for a jaded, aging misanthrope like me.  Given his diminutive stature, the fact that he’s essentially a juvenile and that the Galaxy that he and the rest of the Guardians save on a regular basis is a terrifying and ugly place, I sort of assumed that any adventure in which Groot had to face adversity, tribulation and trial on his own, would end up with him being splintered into even tinier fragments. After all, it’s a big, bad Universe and Groot’s a very small tree. The odds aren’t exactly in his favour.

So how does Christopher Hastings deliver maximum bang for reader buck and keep the most popular, and diminutive, member** of the Guardians of the Galaxy alive? Well, I’m glad you asked. He does it by catapulting Groot into what is essentially a stygian, space bound fairy tale that combines elements of the Brothers Grimm, Lewis Carroll, Michael Ende and L. Frank Baum’s most famous works with Zardoz, cutting edge theoretical physics and a dash of Lovecraftian horror. The Forgotten Door is story of wormholes, forgotten purpose, stagnation and release in which Groot helps a subjugated people stand up to, fight against and reclaim their home from an evil ruler who has let their world fall to wrack and ruin in order to satisfy and satiate their own lust for power. And Flaviano’s eighties centric, retro artwork that’s filled with a sense of wonder and mischievous purpose is the perfect vessel to bring Hasting’s enchanting and thoroughly enjoyable story to glorious, galactic technicolour life. It’s true you know, size really doesn’t matter… Tim Cundle

*I said almost because there’s bound to be a wisenheimer or two out there who after reading that will roll their eyes and utter something along the lines of “Am I the only one who thinks Groot sucks?” And the answer to their rhetorical question is, yes. Yes you are. You’re the only person who thinks Groot sucks.

**Face it, it’s true. And I hate to burst your bubble and all, but Groot really is the most popular member of the Guardians.