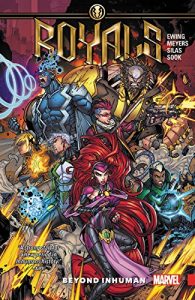 The poor homo sapiens of the Marvel Earth.  They have to share the planet with a plethora of other races.  There’s Asgardians, Olympians, Eternals, Deviants, Atlanteans, mutants, Lava Men, Moloids and the Watcher knows what other races knocking about.  There’s also the Inhumans, a race genetically modified by the alien Kree who thought it would be fun to splice the genes of cave men in order to give them amazing super powers and potentially utilise them in their war against the Skrulls (evil alien shape changers).  The Kree eventually got bored of their genetic playthings and abandoned them to their own devices.  The spliced up cave men became the Inhumans and discovered that they could unlock their genetic potential by exposure to a semi-mystical gas called Terrigen.

The Inhumans first appeared in the pages of the Fantastic Four in 1965.  They comprised of Black Bolt who could destroy mountains with his voice; his wife Medusa who has prehensile, living hair; Gorgon who has cloven hooves for feet and can create seismic shock-waves by stomping on the ground; Karnak the Shatterer who can discern anything’s weak point and shatter it with a single blow; and finally Triton, an amphibian.  They were the ruling royal family of Attilan, a secret city where all Inhumans dwelt and they’ve made periodic appearances ever since.  Of course, with an entire city of super-humans to choose from, there have been numerous other Inhuman heroes and villains over the years.  Crystal is a mistress of elemental power who’s served in both the Fantastic Four and the Avengers;  Lockjaw, a huge teleporting dog; and Maximus the Mad, Black Bolt’s insane, mind controlling brother.

But until recently, the Inhumans were ‘just another race’ in the Marvel Universe.  They pretty much kept to themselves only showing their faces for a team up or two.  But recently, Marvel has given them a huge push, even giving them their own TV show.  The Terrigen mists that give the Inhumans their super powers leaked out into the atmosphere where it was discovered to be highly toxic to Earth’s mutant population, causing many to die.  The surviving mutants go to war against the Inhumans and after a massive crossover event, a lot of mutants were dead and a lot of new Inhumans appeared (thanks to crossbreeding over the centuries placing dormant Inhuman genes in many of the general populace, that activate due to the massive Terrigen cloud wafting through the atmosphere).  The Terrigen cloud is eventually destroyed and peace is restored.

Which brings us nicely to the Royals.  With the Terrigen mists now gone, new Inhumans have nothing to activate their powers making this generation the last generation.  Realising that they are ultimately responsible for this (as well as the small matter of the destruction of Attilan) the ruling royals abdicate the throne and introduce elected government instead.  But because that would make for a pretty dull read,  enter Noh-Varr, the Kree adventurer known as Marvel Boy.  He offers the royal family a trip to the recently destroyed Kree homeworld where he believes he can find the secret of the Terrigen mists which he’s happy to share.

A crew of volunteers is quickly formed and they head off for a galactic quest that could have profound consequences for their entire race.  Representing the old school Inhumans there’s Black Bolt, Medusa, Gorgon and Crystal.  From the new generation there’s Swain (mind control powers) and Flint (can control rocks).

But it’s not going to be all that straight forward.  One of the team isn’t quite what they seem, Gorogn’s feeling his age and is suffering from back ache, Medusa might be dying and waiting for them on the Kree homeworld  is one very pissed off Ronan the Accuser (who also happens to be Crystal’s ex-husband).  This stuff is never straight forward.

This volume reprints Inhumans Prime #1 and Royals #1-5 with a cover gallery and such thrown in. It’s an entertaining enough read but there are a few problems.  Most, I think, stem from the characters themselves.  It’s just not that easy to relate to them.  Picture yourself as a small child getting your first taste of superhero shenanigans. You can dream of getting powers by being bitten by a radioactive spider or injected with a super soldier serum.  You can dream of getting powers when you hit puberty due to being a mutant.  But being a member of a part alien/part human royal family?  One step too far down the road of unlikely I think.

Black Bolt has always been a bit of a cipher as he doesn’t talk for fear of his voice destroying everyone around him.  Medusa is proud and haughty, as a queen should be but Gorgon, Triton and Karnak have never had much of a character to them, being there mostly just to make up numbers.  Unfortunately the same is true of the new chaps, neither really get a chance to shine here.  They could develop in time though but you’ll probably have forgotten them a week after reading this.

So do I recommend picking this up? Yes, if you’re a fan of the Inhumans or if you’ve read through (and enjoyed) the recent Inhuman/X Men war storyline and want to see what happens next. Or if you’ve enjoyed the TV show and are curious about the Inhuman’s comic origins.  No, if you’ve never heard of the Inhumans or if you’re only curious – there are better starting off points than this.  Overall, it’s fairly entertaining, but there’s better entertainment to be found.  The running gag about Gorgon’s backache is fun though. Paul Ferriday