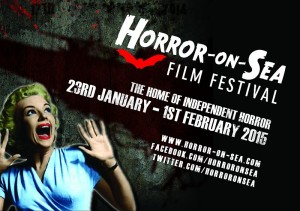 Paul Cotgrove is having a party. Jason and Freddy are too scared to come. But you’ll have one Hell of a time…

That’s the promise from the impresario behind Southend’s hugely successful Horror-on-Sea Film Festival, as the event returns for a third-successive year. And in a festival first, this year the audience themselves will be part of a film – as a new movie is shot during the festival is screened on the final night!

With demand for this year’s (17-19 January 2014) scarefest running so high, Paul took the decision to spread the 2015 festival across two weekends; giving fans of the genre more chances to enjoy a gore-packed programme of feature and short films, plus meet actors and directors.

The fun starts on Friday 23rd January at the event’s regular haunt, the Park Inn by Radisson Palace hotel located at the top of Pier Hill, with the second part – the Rest of the Fest – running from Friday 30 January at the White Bus Cinema, in the TAP building, on North Road, Southend. “The reputation of the festival is already such that I was inundated with entries for next January’s event,” explains Paul. “Also, the standard of the submissions is so good, that I just had to give the work the audience it deserves – and that meant making the festival bigger.”

Not only will this be welcome news for the local eek-onomy but also die-hard fans, as Paul and his colleagues at the White Bus have negotiated discounted accommodation rates available at the festival’s principal venue, the Park Inn by Radisson Palace Hotel, overlooking the seafront and world-famous pier.

The 2015 edition of Horror-on-Sea will feature nearly sixty brand new, independent horror films from thirteen countries around the world; including the USA, Belgium, Finland, Serbia, Portugal and Australia. 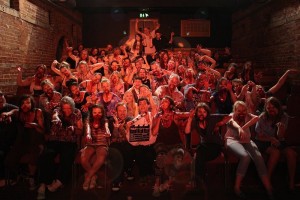 Highlights will include a screening of Spencer Estabrooks’ monsterific Sharkasaurus (from 3pm, Sunday 25 January) followed by a discussion with the cast and crew, a Grime House Premiere (from 8pm, Sunday 25 January) – in which a short made during the Festival will be screened for the very first time and the return of the ever-popular writer and director, Pat Higgins (KillerKiller, Hellbride, Trash House, Bordello Death Tales). Pat will be delivering a masterclass, in his own inimitable style, about How Not To Make A Horror Movie (Saturday 24 January, at 3pm).

The bill promises an absolutely monster smorgasbord of spine-chilling terror, with zombies, serial killers, call girls, vampires, werewolves and conjoined twins running amok. As ever, the movie’s titles are equally bizarre and, in some cases, bafflingly prosaic; such as Potty Mouth, Kill, Granny Kill! and Bernard.

“It’s really exciting and gratifying to see so many people wanting to come and support Horror-on-Sea,” Paul says. “To think that the guys who made Sharkasaurus are travelling all the way from Canada to join us shows how important the festival is becoming for this area of film-making. What’s more, Horror-on-Sea is becoming an important date in the calendar – not just for fans of the genre but also budding writers, producers, directors and actors. To have something that is not only brilliant fun and great value entertainment but also inspiring and educational is very satisfying.”

Just as with the previous festivals, tickets for Horror-on-Sea won’t cost you an arm and a leg – unlike some of the ‘victims’ in the films! Prices stay at just £5 per film, £20 for a Day Pass and for the serious fans a Weekend Pass – that gets you into everything – offers unbeatable value deal at just £50. For a full list of all the films and booking details, check out www.horror-on-sea.com