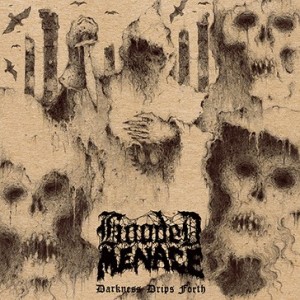 A person has certain expectations when listening to a death/doom band from Finland; this tiny country has the most heavy metal bands per capita in the world, with roughly 54 bands per 100,000 people. With that in mind, it can be difficult for bands to step out from the maelstrom and get noticed. Hooded Menace may not have as many years under their belt compared to other classic Finish doomers, but they’ve been quietly honing their skills since 2008. Tweaking what was already a brutally heavy sound, it’s safe to say that with Darkness Drips Forth, like the coffins they routinely sing about, they’ve finally got it nailed. The four tracks on this LP, their first in three years (they’ve kept busy with EPs and Spilts) are each about ten minutes long and are all as crushingly heavy as they are forebodingly melodic. There are nods to old school death like Candlemass throughout the snail’s pace riffs of guitarist Lasse Pyykko, interspersed with the odd small solo to lighten the horrifying feel, capped off with Pyykko’s guttural growl that you could use to dredge lakes. Tracks ‘Elysium of Dripping Death’ and ‘Ashen with Solemn Decay’ being the best examples of this. The band never lets up throughout though and culminates in the pulverising closing track ‘Beyond Deserted Flesh’. Violent and bruising, but with small moments of relief, giving you just enough time to take a breath before beating you back into submission. Compared to other popular Finish death/doom bands, Hooded Menace may appear more underground, but with ‘Darkness Drips Forth’ they are (ever so slowly) pulverising and oozing their way into more heady company and standing out from the crowd. There’s something that separates these guys from the usual genre fare. When you listen to this, play it very, VERY loud. – Richard Thomas