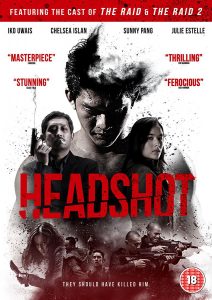 Viscerally directed by ‘The Mo Brothers’ so you grimace at every bone-jarring blow, Headshot is a high-octane revenge flick, loaded with some of the most savage martial arts showdowns you’ll ever see. It is quite literally the most insanely violent film your reviewer has had the good fortune to watch for years, and you can forgive the clichéd plot (ex-gang member gets washed up on a beach after being betrayed, shot in the head and left for dead with complete amnesia and a formidable set of fighting skills…) simply because you don’t have time to think about it.

The action comes thick and fast, as do the prolific gouts of blood, and the whole film is basically one big dust-up, although the set-pieces are varied enough to ensure it never gets boring, with some of the most monumental showdowns taking place in an office (making full use of typewriters and guillotines to maim and kill), a wooded glade, a prison cell, a bus and a sunny beach. The film never looks less than wonderful, with every shot beautifully framed, and every gritty scrap filmed ‘in the pocket’, so you feel like you’re right there with the protagonists. Factor in a truly frightening villain in the shape of the psychopathic Father Lee and a star turn from Iko Uwais, whose acting is almost (but not quite obviously) as good as his jaw-dropping pencak silat, and you have a martial arts film for the ages, right up there with (Iko’s break-out film) The Raid and Ong Bak. Absolutely stunning. Ian Glasper