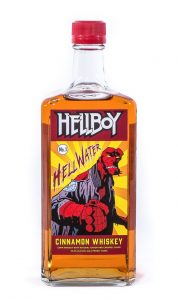 Since Mike Mignola’s Hellboy first hit the stands in 1994, it has become a cultural sensation, racking up a dozen Eisner Awards and inspiring numerous spinoffs, from a novel line, to video games, to animated films and live action feature films. Hellboy has also inspired a draft ale, a wine and now Hellboy Hell Water Cinnamon Whiskey.